Last night I competed in our local beer mile.

The idea of this race has intrigued me since I first read about it in 2009 when Amy competed and won it in Tennessee.  I'd never heard of it before, and I thought pretty much the same thing she did -- hmm, I'm a pretty good runner, and I'm a pretty good drinker, maybe I should do that!  So I have been searching for a local one ever since.  And encouraging the right people to organize one.

It's not a typical race.  First, there are no bibs and no paid registration -- for obvious liability reasons.  Second, your chugging skills are at least as important as your running skills.  Third, if you vomit, you have to run an extra penalty lap (for a total of 1.25 miles, but you still only have to do 4 beers).

Basically, the way it works is a track is marked for a little "drinking zone."  Not sure how long it was.  Maybe 8 feet long?  Everyone competing lined up their 4 beers (we all used cans) in that zone.  The rules are that it cannot be a wide-mouth can, it cannot already be opened, it must be at least 5% alcohol

So the grand total is 4 beers and 1 mile.

I was totally intimidated by the group.  There were guys of varying levels (including several I know to be sub-5:30 milers) and only about 5 women? 4?  Either way, I knew at least two of them to be significantly faster than me.  Including one who was the winner last year (I was already home for Christmas, so I missed it).

But she assured me that I could beat her.  She admitted that she's faster than me, but only by about a minute (maybe less) for a mile.  She said that if I could chug even a bit faster than her, the running wouldn't make a difference.

And while I am not a huge alcohol drinker in general, and when I drink it's not usually beer, I can chug almost anything.  I think it's because I'm used to drinking so much water.  When it's time to leave work, I hate leaving water in my bottle overnight, and I'm too lazy to go dump it in the sink, so even if it's full (24 oz.), I'll just chug it.  But I also have experience with beer chugging.  In law school, we had a game that we'd play at parties when it was time to go.  Whoever wanted to leave would get the others to chug -- they'd say, okay, ready? 1-2-3-you chug!

So I figured I had a shot.

The race started and a couple of the guys chugged really quickly and took off.  Then a bit later, another bunch of us finished and took off.  And about half the group was still chugging the first beer.  I was the first woman to start running, but after about 200 meters I got passed by one of the faster women.  And I was nervous.  I was burping and felt pretty horrid already.  I couldn't imagine how I'd feel after more beer.  And right as I was finishing my first lap, I was passed by last year's female winner.

So into the drinking zone with 2 women just ahead of me.  But on lap two, I was again, first woman out of the gate after my second beer.  And I would say I didn't feel significantly worse than on the first lap.  I was burping a lot and it was audible.  I joked with one of the guys running near me that my brothers would have been proud to hear me.

I did not get passed by any woman on lap 2, but the 2 that had been ahead of me weren't far behind.

Chug 3 was where it made the difference.  That beer went down much more easily and my confidence built.  During lap 3, I felt like I was spinning a little bit, but I remember being about 200 meters into the run and realizing that the other 2 women were still chugging beer 3.

At that point, my sole focus was on not vomiting.  I thought the only way that I'd screw it up would be to have to run an extra lap.

And I managed to do it!  Three of us finished within 10 seconds of each other, all between 8:40 and 8:50 (me and two guys).  My husband has hilarious video of the finish line -- I became quite uncertain I'd been the first woman because there were other women standing around -- but then I finally realized they had beers in their hands.  They still had a lap to go!  But then after I understood, I still kept asking people -- mostly just because I wanted to hear it again and again.  I'd won!

But eventually that got old and I started feeling really dizzy.  I was pretty sure I'd get sick, so I went over to part of the fence around the track.  I ended up keeping it all down but it felt very touch and go.

It felt like forever before the prior female title holder crossed the line, more than 3 minutes behind me.  And then nearly 2 more minutes before another 2 women.

I felt compelled to keep high-5ing everyone.  And doing so repeatedly, until I felt like we'd gotten a solid one.  And instructing people on how best to do it -- they put their hand up and hold still and I aim for it.  And it was awful how many times I missed.

We all left the track and went back to the organizer's house for ... beer!  That sealed the deal, I couldn't drive home.  Initially, I'd thought if I hung out at least 2.5 hours after my last beer, I'd be okay to drive, but when I had another at the house, it was going to be too late before I could drive, so I rode home with hubby and will have to go get my car today. 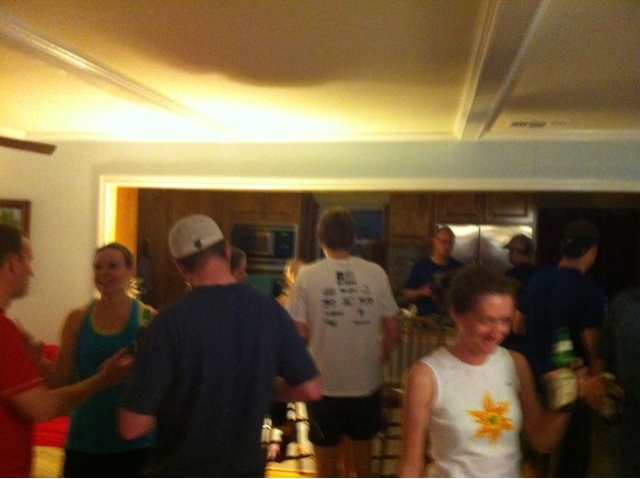