In terms of weight, I think I may have been at my most content in the last decade-plus in mid to late 2013.  Since then, the pounds have crept on, slowly sometimes, in six big plates of pasta eaten in Italy at other times.


I have been trying not to stress about it, but to focus more on good food choices and plenty of activity.

As always, I made a list of resolutions this year, among them, getting back to my "happy weight zone," which is defined by me as the 8-10 pound range where I felt the best.  Technically, it's a 10 pound range, but it's only my lowest weight in the last decade plus 8 pounds -- meaning if I ever got back down to that weight, and then lost 2 more pounds, I'd still be in the happy range.  If I lost more than that, I'm sure I'd look better, run better, and possibly feel better, but given the way I view food (joyfully, full of love, often a treat, something to savor and enjoy, rather than just fuel), and the foods I like, if I dropped below that weight it would probably mean cancer or some other illness.  So it's a 10 pound range in my head, but in reality, an 8 pound range.


So anyway, as of this morning, if I could lose a little less than 2 more pounds, then I will only be 5 pounds away from the very top of my happy weight range!


That's still a lot of work (almost 7 pounds of it), and I'm not underestimating that, but it's closer than I've been in months.  Yeah!


Buuuuuut... right before Mardi Gras...  Oh well, hopefully with a few more months of good choices and bonus workouts, I might get there.  And when I'm back in the happy range, then I can keep going and get toward the middle of that range.  Or even the bottom, but one step at a time.


If I define a workout as a single session of weights or running at least 30 minutes, then right now, I'm usually doing about 9 workouts per week -- two boot camps, one long run, three runs in the 5-7 mile range, two commute runs, and one extra class (twice this year it's been spin, and that's definitely growing on me).
Posted by Carina at 6:49 AM 4 comments:

Valentine's Day seems to be a really big holiday for people who are dating, but less so for the rest of the world.  For us, it's usually an exchange of cards, flowers and sometimes chocolate for me, and some type of event for us -- special dinner, a show, whatever.  Most of all, lots of extra "I love you"s, shmoopy texts, kisses, and hugs.


This year, we decided to get tickets to Shen Yun.  We went the weekend before last and it was an experience.  The dancing was amazing, and we each had favorite pieces (my husband liked the Tibetan drummers, I liked the yellow blossom dance), but we were both very surprised that about 2-3 of the 12-15 dance vignettes seemed to be very anti-Chinese government.  We were totally clueless walking in!  The website has details about how the performance company believes China's government is trying to make the company fail (and the Chinese government's opposition to Falun Gong (or Falun Dafa)).  But we didn't know any of that going into it, we just expected a 2-3 hour dance performance.  Anyway, politics aside (not that I'm sweeping any issue under the rug, I just know it's quite complicated), the dancing was lovely and it was nice VD celebration for us to be all dressed up and out together, whispering in our box about propaganda, whether we were being recruited, memories of when we were in China...


So when it got to be Sunday night this past weekend, my husband asked what we were going to do for the actual day of VD.  Since that meant we had no reservations, I suggested he come to a spin class with me.  And he agreed!  He usually hates working out at night, and while he loves biking, he's not big on spin, but in the interest of making me happy and ensuring we got to do something together on the actual night, he packed up his biking clothes.


Why spin?  Well, it's being taught by the great Megan Lyons!  At a fun studio, Grit.  If anyone can convince me to spin, it's Megan.  She's a great instructor and I might stick with it on at least a somewhat consistent basis (at least a couple classes per month hopefully) (of course it's very easy to say that since my work travel doesn't start for another month...).  Anyway, my first class was solely an effort to survive.  Megan's sister had given me some tips and I mostly kept the tension off and just tried to move my legs.  But for the VD class, I actually tried harder.  I'm not going to deny that there were multiple times my RPMs were below what she had set as the floor for the class, and I'm sure I always had the tension lower than it should have been, but baby steps!  I managed to get 13 miles in during the course of the class!
Posted by Carina at 11:22 AM 1 comment:

Also blog-worthy, my niece/nephew brood grew again.  And I got to be there right afterward!


About 9 days before my sister-in-law was due, my brother mentioned their contingency plan if she went into labor early.  She was due on a Thursday, and her mother was coming to town the Monday before.  And if it happened before that, they were just going to bring their son to the hospital with them, since they just moved to Oregon in December and don't have babysitters yet.


Plan was born.  My brother and I talked on Tuesday.  He cleared it with his wife, since I was far from certain she'd want company being 9.9 months pregnant and it was short notice, and it was their last weekend as a family of 3.  And then I had to run the plan by my husband -- I've been traveling a fair amount for work and lately he's been really adverse to me going anywhere for fun alone if it means extra days apart (well, it's actually mutual, since I've vetoed a couple things he was considering).  My husband said he was on call all weekend anyway, and it would be nice, so I should go.  So on Thursday morning, I bought a plane ticket for Friday morning.  Packed Thursday night and went to bed.


And then my phone beeped.  Her water broke.  A full week early.  Ugh.


So as I sat on the runway in Dallas Friday morning, Friday the 13th no less, my newest niece made her entrance into the world.


I got to the hospital that afternoon, certainly the freshest/newest baby I've held in ages, maybe ever.


So I got to hang with my sweet nephew Fri night and then Saturday my brother and his wife came home from the hospital with baby Ava.


I held her as much as I could before I had to leave. 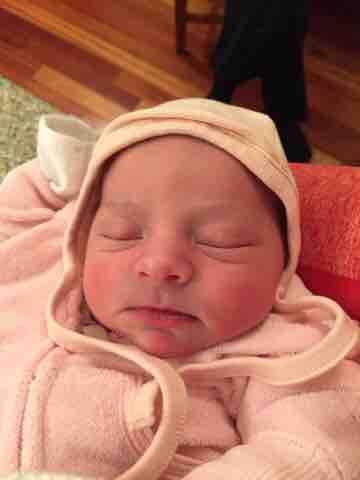 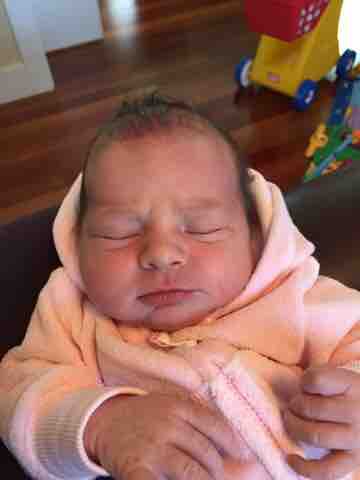 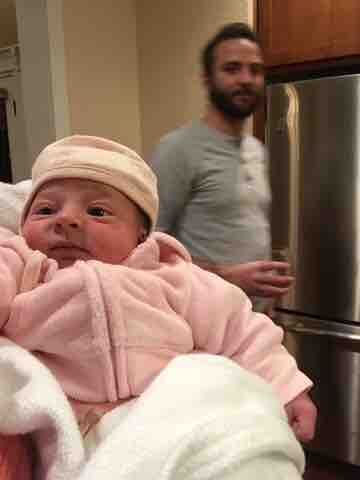 In her first 72-ish hours, she seemed to have a very sweet disposition.  She slept a lot.  But I remember when her older brother was a baby, and it seemed like if he was awake, he was screaming. Especially if he needed a diaper change. Not her.  Very rarely cried, except when she was being changed.  We think she didn't like the cold.

When I was holding her on my last day there, I had her wrapped in a blanket.  I held her for about an hour.  At one point, she fussed, but it was for less than 3 seconds.  When it was time to go, I finally handed her back to her mom, and the blanket slipped off and there was $hit EVERYWHERE.  Like everywhere.  All over her pants, the bottom of her sweater, the inside of the blanket.  Like she had had a colossal diaper blowout under the blanket.  But she didn't care, just totally easygoing.
Posted by Carina at 7:19 AM 3 comments:

So I woke up this morning in the middle of the most nonsensical dream ever.  I was involved in a court case about an injunction related to changing a highway merge pattern.  This woman who said she was a "country lawyer" had two designer skirts she was trying to sell on Madden (apparently the name of something like Craigslist in my dream) and she didn't have any buyers, so they should leave the highway unchanged so she could easily get into the city and wear her skirts.  Huh???

Not what I planned for my first post back, but whatever.  I'm alive and dreaming, apparently literally but oddly.  I definitely keep meaning to blog, even if it's short.
Posted by Carina at 11:25 AM 4 comments: