My running commuting has been limited the last several weeks because of mid-week work travel (since I have to travel with my laptop, before and after a work trip are blocked from run commute because I need to get the laptop home or back to work).


But the last time I had a week where I anticipated multiple run commutes, I filled up my garment bag with several outfits, and I've just been slowly working my way through them.


I wore the last outfit in the bag yesterday, and I looked ridiculous.


Yesterday was my hottest morning commute so far this year (mid-80s and SUNNY, but only about 70% humidity).  I got to work, and went straight to my office.  Followed the routine there -- unlocked my laptop and turned it on on the docking station, filled my water bottle, got out my hair/makeup/shower bag, and then went to get my last remaining outfit.


Ugh.  Thick khakis and a dark cranberry cardigan and sweater tank.  In reality, if it didn't look so out of season, it would have been fine since our office is way colder than I like.  But it definitely looks like a winter outfit.  I'm not even sure why I would have packed it in May.


Anyway, I went down stairs and showered but I couldn't stop sweating as I dried my hair, even trying to use the cool setting on the hair dryer.  I wish there were a huge fan in the locker room.


I got dressed in my appropriate-for-a-high-of-75-not-a-low-of-85 outfit, and went back up to my desk.  I decided to shut my door and just work in my sweater tank until I cooled off.  I hate doing that, especially since I have a glass wall so my unprofessional sleeveless look is still visible to anyone who looks, but it felt necessary.  I peeled off the cardigan, which was 100% stuck to me and my sweater tank had massive wet spots on it from my sweat.


I finally stopped sweating and cooled off, and put my cardigan on and opened the door.  And then worked all day.


Not until I was getting changed to run back home did I realize I'd worn the cardigan inside-out all day long.  And it has a massive tag in the back.


I'm in Philly working next week, and again the week of the Fourth.  But the next garment bag will definitely be all summery clothes.
Posted by Carina at 7:03 AM 4 comments:

So things have been crazy lately.  I think my flying mileage total for the last week is over 9600 miles.  Yowza.


It looks like I've got a whole lot of Philly in my immediate future.  No big deal, it's one of my favorite places, largely because of the food and my defense counsel there.


I have found a few wonderful all-vegetarian restaurants, so my solo meals there are actually great.


And since I've been flying in and out of Philly regularly for the last few years, I used to have a pretty good airport routine too.


Until the last month or so.

The Philly-DFW flights are now going in and out of Terminal B, instead of the usual A3, A5 or A7.  My routine was always to trek to terminal C if I got to the airport early and if we'd had a successful day, and get some fro-yo.  Then go back to right near my gate in Terminal A and either build my own salad at Saladworks, or get a tofu teriyaki burrito from Currito (I vouch only for the Terminal A location, I've tried one other Currito, and it was not as good, but the PHL tofu teriyaki burrito is almost unbeatable in my book).


Occasionally, I'd even get both, if we hadn't gotten to take a lunch break -- I could always save the rest for lunch the next day since I was flying home.


But for the last month-ish, we've been landing in and taking off from Terminal B.  Which blows.  Sucky food choices there.

Well, this week I got to the airport early enough that I missed the 4:30 flight, but I had a confirmed seat on the 6:00, and plenty of time to get food.  So I went for froyo, then I went back to the old gate for a salad.  Then all the way back to B7 to get on the plane.


On the flight home, I worked until my laptop battery died, then I got out my salad to eat.  A couple people (two flight attendants, one nearby passenger) commented on how good my salad looked.  It was great.  Love that salad place (though I really wish they had beets available as a topping).  One of the flight attendants (not one who had commented) picked up the empty salad container as we were getting ready to land, and he said he hadn't thought I'd be able to eat the whole thing since it was big.  And I lamented the struggle that has become my (PHL airport) life -- walking all over creation to get my food in light of the terminal change.  He suggested one terminal B place as an alternative, and I shot it down.


As I was getting off the plane, he was up front (first class flight attendant) and saying goodbye.  He said something like, you and your salad.  I said "move back to terminal A" and he said "not gonna happen."  Dream-killer.


So alas, my routine either becomes more difficult, or needs to be changed.  Oh well.  If that's my biggest complaint these days, that works.  Maybe I should start some online petition to move the PHL-DFW flights back to the low A gates.  I wonder how many signatures it would take to get that done...


Oh well, off to CLE today -- excited about an awesome weekend with my law school roommate, and then an Akron mediation...
Posted by Carina at 8:22 AM 4 comments:


I know they do all kinds of stuff to our food, but this apple was huge. 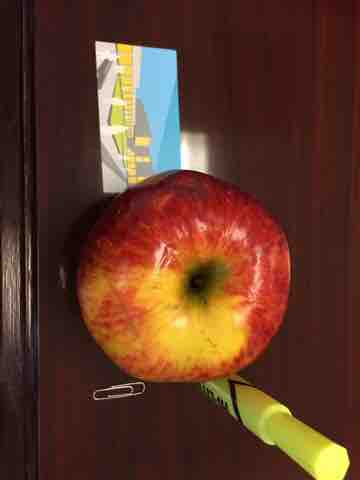 I tried to place some everyday items (including a business card) by it, so you'll get an idea of the scale. 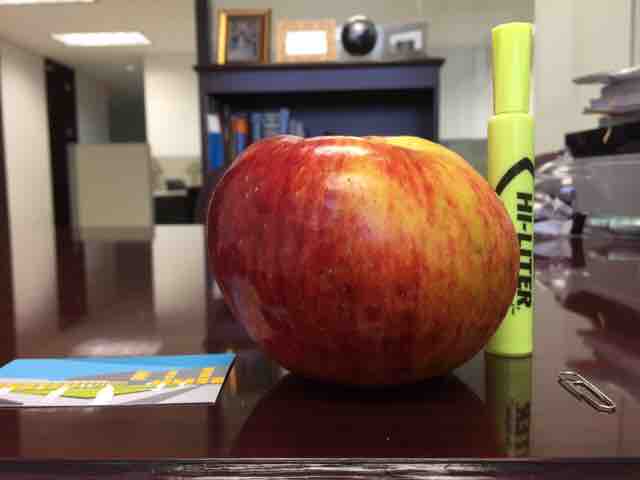 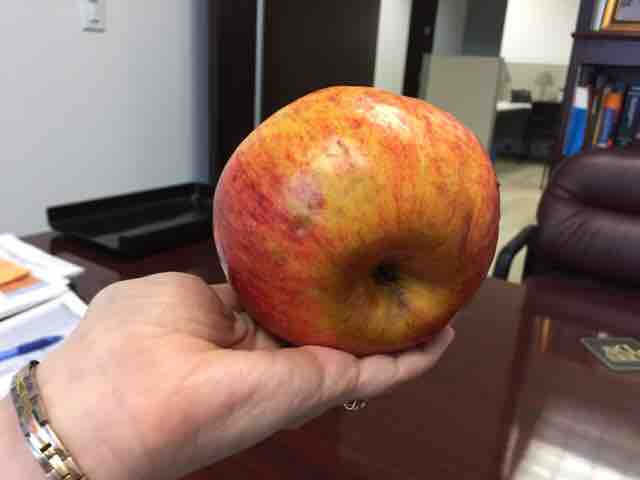 Also, I think I have fingers that would rank as a 6 on the length scale if 5 is average for a woman of my height (and 10 on that scale is Edward Scissorhands style). 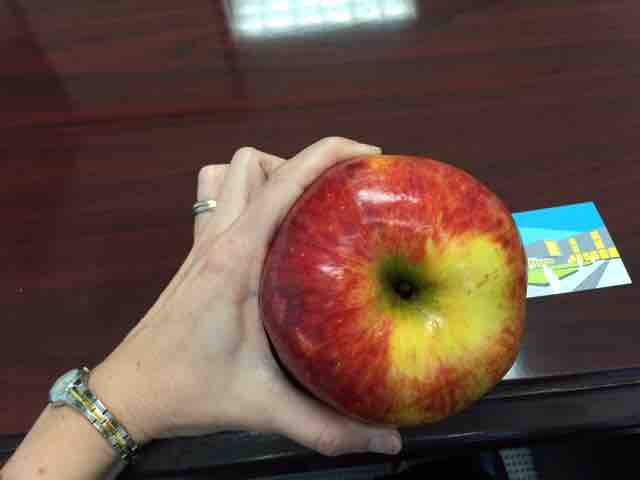 Also, older picture, but since I work from home on Fridays, I usually eat a baked potato for lunch.  One of my favorite foods and I always tell my husband to buy the biggest one he can find.  I actually put on the shopping list that I want a baking potato "bigger than my face." 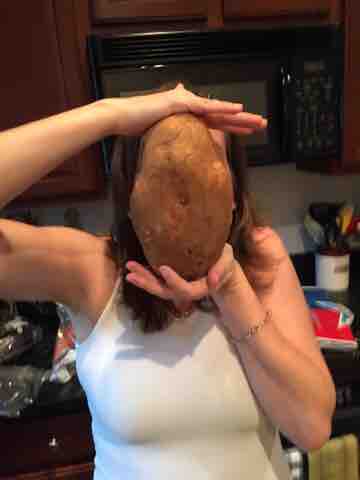 That was me trying to show him that this was very close, but still actually slightly smaller than my face.

I think in the end, I'm not vehemently opposed to unnaturally large produce.
Posted by Carina at 6:23 AM 4 comments:

From my office, I have a good view of the mall parking lot.


These cones appeared at random, but why??? 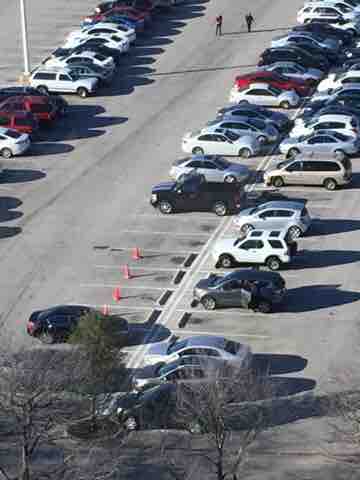 They don't appear official since there's no mall vehicle near them, and it's just totally random.

Sinkhole forecast.
They're going to fell the light pole and that's the direction they'll bring it down and they're waiting for the other spots in the path to open up.
Some high roller is coming and wants to walk into the mall from mid-grade parking.
They're going to parallel park a bus there.

I wonder what's going to happen around lunch time, when things get really busy.  Will people really just give up 4 spots because there are cones in them?  At lunch time, usually the valet rows (far left) are full and there no spaces near the door closest to my office (and closest to these cones).  Sometimes cars drive up and down the rows looking for a spot, instead of just driving into the lot over by the department store.

The suspense is killing me!
Posted by Carina at 11:17 AM 5 comments: