My main Christmas question was ... why?


Specifically, why in the world would a company make and market a game called "Pie in the Face"?


And a related question -- why would my aunt buy said game for my nieces and nephew?


And a related question -- when we are playing a lovely game of Apples to Apples (which my niece had received), why would my brother bust out Pie in the Face and insist we play?


Thankfully, I only played two rounds and I "won" both rounds (i.e., no "pie" (whipped cream) in my face), but I laughed regrettably hard at seeing my husband "lose" both rounds (I honestly didn't think he'd even agree to play, but the kids wanted him to and he obliged without complaint), seeing my brother lose, and seeing my nieces and nephew laugh like crazy.

But still, horrible, horrible game.  Avoid at all costs if possible! 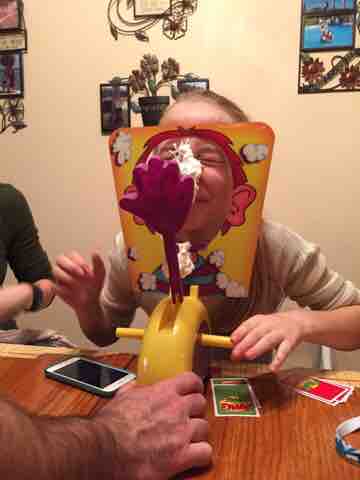 Part of the reason life is so crazy right now (besides doing the work of two attorneys right now) is because we are flying home for Christmas this week Friday.


We had a lovely local Thanksgiving, then the following weekend we were both out of town (me in San Antonio for the marathon, husband in Pittsburgh visiting the 'rentals), and then there was this past weekend -- essentially the only "holiday prep" weekend available.  Next weekend we'll be in Milwaukee and there will be time to wrap the things I shipped up there and do shopping for a couple more items, and then we'll drive up north on Monday for the rest of the week.


But only one weekend in town to do all of my "big four" holiday tasks -- baking, cards, shopping and wrapping.


Most the shopping was done online already, so it's pretty easy to check that item off the list -- although of course the few things that remain to be bought really need to be done ASAP.


I did manage to wrap the only gifts that really needed to be wrapped (my husband's, the others will be given after we come back to Texas and therefore can be wrapped later, or will be going on the plane and don't necessarily need to be wrapped now).


As for cards, I managed to address envelopes to everyone who sent us a card last year and a few others.  I'd still like to do cards to everyone else we usually send them to -- but that entails buying more cards.  I still need to write out all the cards (I've always been one to write some kind of note, I honestly don't like getting the "envelope stuffed" ones that much), and put on return labels and stamps, plus I need to make labels for the backs of our photos that we enclose in most cards.  Yow.  But really, I could mail cards from Milwaukee and it wouldn't be the end of the world.


Baking is done.  The one thing that absolutely couldn't wait, didn't.  Unfortunately, I didn't get a chance to divide up the cookies and put them on plates/platters for distribution, but that will have to happen tonight (since I want to give the 4 work plates of cookies while they're fresh, plus there's 1 running friend on the calendar tomorrow, and another holiday party tomorrow night to which we bring a plate).


8 kinds of cookies.  This morning at boot camp, Megan asked me how many of those I ate -- I concluded 10, but I might have been slightly underestimating.  But they all met my stamp of approval.


The sad part of baking was that this year, it was largely a solo endeavor.  My husband helped with the three that really needed it -- the kind that needed decorating, the kind that needed "urgent" work (quickly shoving marshmallows on top while they're partially baked), and the kind that are best done by fingers with very low heat sensitivity (arranging the wreaths, made from corn flakes, marshmallows and butter).  But for the other 5, I was 100% on my own.  Usually my next door neighbor comes over and we bake as a team, but she's in Italy all month!  Next year... 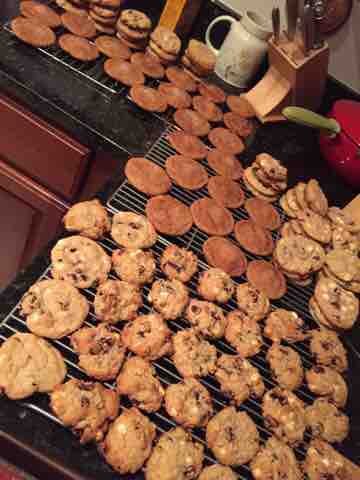 Below, same but with the mint swirls and the decorated shortbreads (already in a bag): 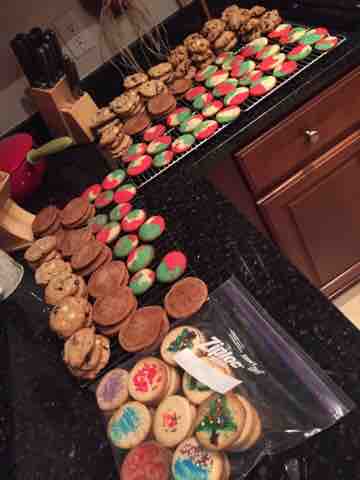 Below are the no-bake wreaths: 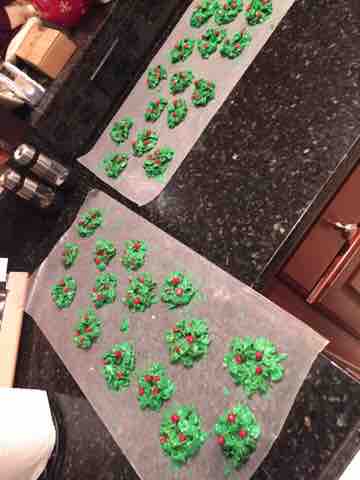 And with the addition below of the hot chocolate cookies: 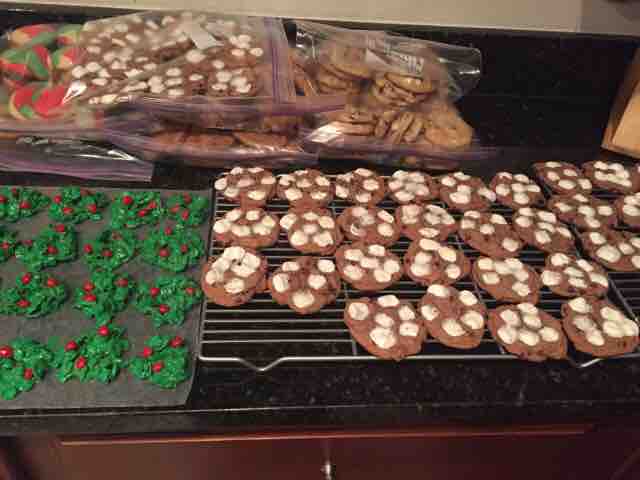 And a poorly lit picture of this year's experiment, peppermint meringues: 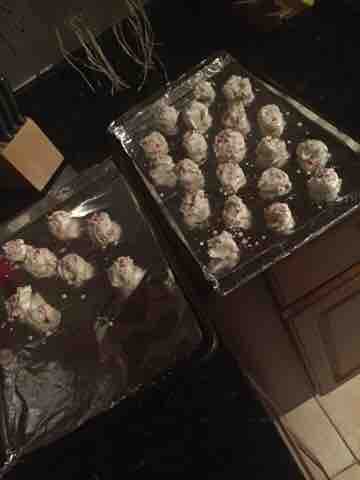 Relief is on the horizon at work.  My new co-worker started on Tuesday, and of the 115 extra cases I'm handling right now, I have given her 6 of them!  And I'm planning to give her 5 more this week.


Last night I left the office after 8.  Oddly enough, I was grateful for it.


I was grateful that I was able to put in the extra time yesterday to allow myself to "tread water" (i.e., maintain an even number of screaming emergencies that need attention in my in-box, instead of going home with a higher number than where the day started).


I was also grateful that working late didn't mean leaving a lonely or pissed off husband at home -- he was at the office past 8 too.  Crazy stuff happening in his work world lately.


I was also grateful that working past 8 is novel for me.  I had a job for about 7 years where I was in the office from 8:30ish until after 10 pm, and frequently after midnight, on a vast majority of days.  That was the normal there, and it wasn't all horrible (though I did gain weight and felt like my dating life was basically on hold), I made lots of good friends, got great experience, etc. (of course being paid well never hurts).


And finally, I was grateful that both of our extra effort and hard work is noticed, and at least in my case, appreciated (probably in my husband's too, but we haven't discussed).  Yesterday at 7:30, as my husband and I touched base about when we were going home and what we'd do for dinner, both of our bosses were still working as well.  We decided to give it another hour and then touch base again.  In that hour, sometime around 8:15 maybe?, my boss left.  On his way out, he told me that he'd talked to our divisional president that day, and I've been approved to go with them to a conference at the end of January that I really wanted to attend.  Usually our company hates sending people to stuff like that -- lost revenue plus travel expenses -- so this felt extra special.


But anyway, all that wasn't the point of this "short" post.  When I finally did get home, I heated up some food from the prepared section of the grocery store and sat down to watch TV while I ate and while I waited for my husband to get home.  I made a decision then, and then I waited until he got home to make sure he approved of my decision -- and then I deleted about 50 hours of Grimm off our DVR.  We just weren't watching it.  I hope I'm not missing out on some awesome show.  We liked the first season okay, but then never got back into it.


Now our DVR has all kinds of space and it feels oddly freeing.  No pressure to clear it off (not that there was any pressure in the past, or that if there was, it motivated me to actually do anything about it).


Not planning to add anything new.  Our current "regularly record and watch" list is:
Law & Order SVU
Anthony Bourdain Parts Unknown (and any of his other shows)
Fareed Zakaria GPS
Amazing Race (my show, not "ours")


The other show we're watching ... no surprise to people who know me in the real world ... Amazon Prime's series The Man in the High Castle.  Like it so far, only about halfway through the season.
Posted by Carina at 9:56 AM 3 comments: