Losing my running commute this past spring has had a massive negative effect on my weekly mileage.  It's such a bummer.  Not enough that I'd go back to my old schedule and have to suffer through the reason my schedule changed, but a bummer nonetheless.


I usually have the most success with a marathon when a vast majority of my training is at a weekly mileage of about 45 or higher, including a bunch of weeks over 50.  Historically, when I've had at least three weeks in a row at 55 or higher, something has started hurting, so that seems to be about my breaking point, and I'm usually rock solid going back and forth between 45 or 50 and something around 55.  But I can't tell if that pattern holds true because my mileage never got there this year.


This is how it broke out (I'm cheating a little on my counting.  I usually do my long runs on Sunday, but on weeks I had to do a Saturday long run instead, I'm counting as if I did it on Sunday instead, so there aren't any artificially high mileage weeks that had two long runs):


Low 20s:  2 weeks (it rained and I totally skipped my long run the week before Memorial Day, plus this week of tapering)


Yow.  Usually writing out my training miles is a confidence booster for me, but not so much this year!  14 weeks of training, counting taper.  All my weeks in the mid-40s and higher were in July and August.  And no weeks over low 50s.


Not a recipe for success!


If I were still running to work, I'd be adding at least 7 miles to each week, usually more like 14 and occasionally 18.  That would have pumped those numbers up perfectly.
Posted by Carina at 7:05 AM 6 comments:

So I breathed a little sigh of relief when I finished my run yesterday.


I finished up my last really long run and I was pretty sure there was a chance it would all fall apart the week after.  Two years ago, that was when it happened -- ran my 22 on Sunday, ran my 9 on Tuesday, and then two years ago, I was supposed to be running 5 in Philly, converted it to 6 (ish, probably more like 6.5) because the weather was so nice, stepped on the biggest rock that had no business in the road, and broke my ankle.


It was kind of funny because Tuesday, I ended up running on two particularly crappy streets that I very rarely run.  Dallas has some serious funding issues right now, most of the press coverage relates to our police pension fund, but streets need repair, water mains are old, all kinds of stuff like that.  Anyway, while on the particularly crappy streets this week, I was certain that was going to be it for me.  I didn't have a light with me, and it was dark later than I realized.  I survived the 9 miles without tripping and having it all fall apart.


So then I thought it would be Wednesday.  I was just doing boot camp and for most of the running, I stayed with my friend Megan, who also wanted to take it easy that morning.  Survived again!


Yesterday was my last run of substance.  8 miles, with the last 2 slightly faster than MP.  Ran on the usual streets but that doesn't give me any immunity from falling.  I was frustrated because for some reason, my watch hadn't charged.  I got my first mile split and it died about a minute later.  My friends were calling me a data mooch since I (and they) became painfully aware of just how often I look at my watch during a run!  I kept asking where we were in the mile and how fast we were going.  I tried to minimize the number of questions, but in the last mile, I asked for the first time (thinking surely we were past .6) and we were at .45.  Asked again when I was sure we'd be right around the mile split, and we were only at .79.  Asked again thinking surely we'd hit the mile and my buddy just had neglected to tell me what the split was -- but we were only at .91.  Yow.  But it's done!


Hills this morning, but super easy pace and decent streets that I'm very familiar with.


Tomorrow is volunteering at a back to school festival with Megan (giving out backpacks and lunch!), and then a belated birthday celebration with a friend in the afternoon, probably just doing a puzzle together, or going to see a movie, then grabbing dinner.


Sunday is my last "long" run -- 12 miles.  Then brunch with friends and nothing else all day.  I'm hopefully going to get some stuff done around the house, and ... if things go according to plan ... try to lay out most everything I need to pack for the race and trip.


Then just a low-key mileage week.  It might actually work out, which will be two years in a row of getting to the marathon starting line injury-free!  I'm so pissed that 2015 broke my ten year streak before that...
Posted by Carina at 6:50 AM 2 comments:

I mentioned a few months ago that I ordered a new passport with extra pages, and I'm getting excited to start filling it up next month.  (By the way, I was worried that government issues could delay obtaining a new passport, but mine came in about the usual time (which I considered fairly quick).)  So the passport renewal step is crossed off my list of things to do.  Next up on that front is visas.  Filling up the pages.

But it sounds like we'll only need one visa for our trip this year, and it's an electronic visa (for Azerbaijan).  And per the last paragraph of the photo below (in Notes), this electronic visa is not "sticked" in passport. 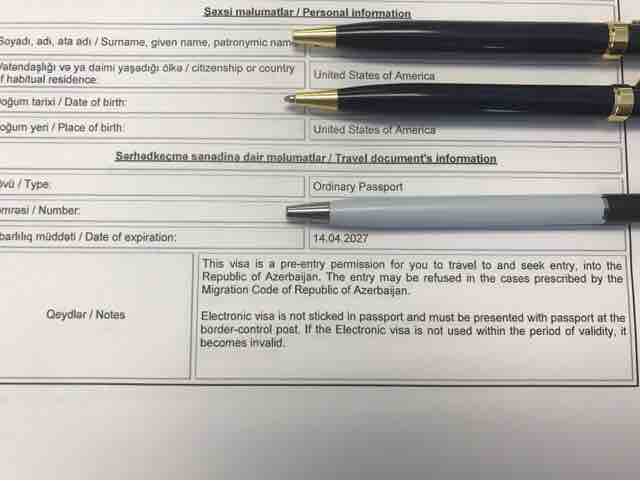 Errors in English often make me laugh (pinesapple on a menu), but I always appreciate the effort.  Heck, I certainly don't speak Azeri!  But for some reason, an English error is particularly funny when it's in an official governmental document (even though of course, English is not the official language, it's just included as a courtesy for foreigners I guess).  So I have printed our Azeri visas and have not sticked them in our passports.
Posted by Carina at 7:22 AM No comments:

I read a fun post about running in Paris on another blog (masteringrunning.com), and she included a section about French running vocab.  Since I'm getting super-excited about our Fall trip, and the only country we will visit where I have extensive experience running is Italy, I thought I'd do a similar vocab post to help with anyone running in Italy.


I would offer to share running routes, but I highly doubt anyone reading this will ever be running in Lamezia, where most of my running has occurred.  My bestie even made a heart-shaped route that a few of us ran the morning of my wedding (well, heart shaped if you blur your eyes a lot, but I knew what she meant!).  As for my running in other Italian cities, I haven't run anything someone else wouldn't figure out.


Runner:  Corridore (m); Corridortrice (f) (but most women just use the masculine, much like with jobs (such as lawyer or doctor))
Sprinter:  Velocista (m.); Scattista (m.)
Harrier/off-road runner:  Corridore campestre (m.)
Road runner (person, not the animal):  Podista (but this can also mean walker, or race walker)
Road runner (the animal, just for kicks):  Corridore delle strade (literally, runner of the streets, but it means the animal, Geococcyx californianus, uccello della famiglia dei cuculidi (bird of the family cuculidi))
Track (the sport):  Corsa su pista
Track meet:  Gara di atletica leggera
Track and field:  Gare di atletica
Distance runner:  Corridore di lunga distanza
Marathon runner:  Maratoneta (m.) (so, il maratoneta)
Jogger:  Persona chi/che fa jogging OR Persona chi/che fa footing
Runner's high:  Sballo del corridor (m.)
Track (the place where we run ovals repeatedly):  Pista (or Pista da corsa) (see above, track (the sport) translates roughly as "running on a track")
Track/path of a race:  Percorso
To run:  Correre (see translations below)
To run (to travel or cover a distance):  Percorrere (see sample sentence below)
Do not run (at a pool, in case of fire):  Non correre
To run a race:  Partecipare ad una gara
Race (noun):  Gara
Run (noun):  Corsa
Runs (noun):  Corse -- there's no worry about using this term and having someone thing you mean "the runs" in any bowel sense, there's no translation of that slang as far as I know, to say "the runs" in that sense, your choices are diarrea OR dissenteria; no false friends here!
Warm-ups, tracksuit (clothing):  Tuta
Start:  Inizio
Starting line:  Linea di partenza
Finish:  Traguardo
Finish line (if you're emphasizing the line part):  Linea del traguardo
Marathon:  Maratona
Half-marathon:  Mezza maratona
Bib:  Pettorina (not the same word as is used on a baby, bavaglino)
Stride (as in gait):  Falcata
Stride (as in footstep):  Passo
To train: Allenarsi
I am (in) training:  Sto allenando (same if you're male or female)
To stretch:  Allungare OR Fare stretching
To cross-train:  Allenare/allenarsi in diverse discipline (somehow, my gut says maybe Italians don't use this expression, maybe they say "cross-train" or  their translations of "bike" or "row" or "lift weights" or "swim" or whatever)
To warm up:  Riscaldarsi
Warm-up (noun):  Riscaldamento
Cool-down (noun):  Defaticamento
Sports drink:  Bevanda isotonica
Water:  Acqua
Wine (since we're speaking Italian):  Vino


A few sentences pulled from wordreference.com:

Those greasy tacos I ate at 2 in the morning gave me the runs.
Quei taco unti che ho mangiato alle due di notte mi hanno fatto venire la diarrea.
(Sorry, the translation sentence made me laugh, I had to include it for you.)

The marathon race is one of the highlights of the Olympic Games.
La maratona è il clou dei giochi olimpici.

I need to stretch my legs before I run the race.
Ho bisogno di allungare le gambe prima di correre in gara.


Past (for these other tenses, I'm only including I/we, most likely to be useful):
I ran:  Io ho corso
We ran:  Noi abbiamo corso


Future:
I will run:  Io correrò
We will run: Noi correreremo (this word is just fun to say, and always makes me think of San Remo, a big Italian music festival)


Now any runner is set to go to Italy and communicate the basics!  Prego!
Posted by Carina at 7:13 AM No comments: