From Wednesday night after work until last night, I was in four completely different parts of the country, covering three separate time zones, and with less than 6 hours at home total.  Ugh!


But it all worked out.  As I was on the phone with one of my dear friends stressing to the max about how I was going to pack for the funeral, and then my next trip, she asked me to think about "what's the worst that could happen?"


That was not a good question to ask me.


That night I dreamt about several horrible scenarios.  The dream scenarios:
Wearing pajamas to my grandpa's funeral because I'd forgotten to pack a dress.
Wearing pajamas to court and being told by the judge to come back in appropriate attire.
Going back to court in a suit but in flip flops because I'd forgotten to pack shoes and the judge sanctioning me and then being kicked out of court and thinking I was going to get fired.


None of those scenarios came to pass, although I did end up running 12+ miles on Monday morning in Denver in HEAVY long sleeves and capris in 63 degree temps -- ugh!  When I'd checked the weather a week earlier, it was showing 30s for the overnight lows and my suitcase was so jammed that I didn't even think to bring a short sleeve shirt just in case.


We were home for the funeral and that was such a good decision.  I can tell my dad was glad I was there.  He had a tough time.  Lots of memories -- I took phone pics of some of my fave pics with my grandpa that were displayed. 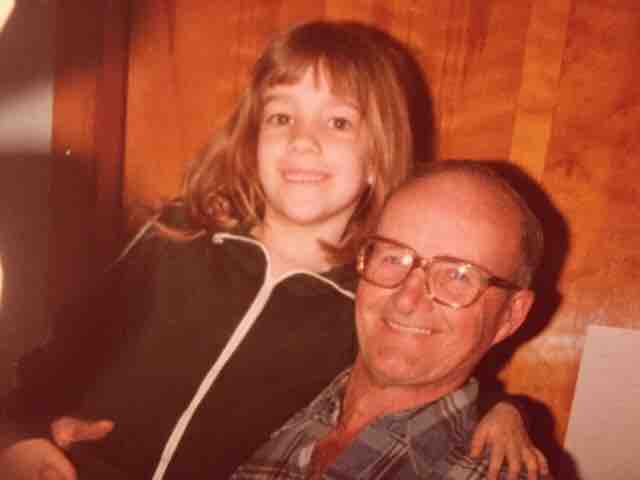 The day was tough, and I think having less than 5 hours of sleep the night before the funeral probably made it worse, but at the same time, it was nice to see some extended family and the service was very nice.  21 gun salute and all! 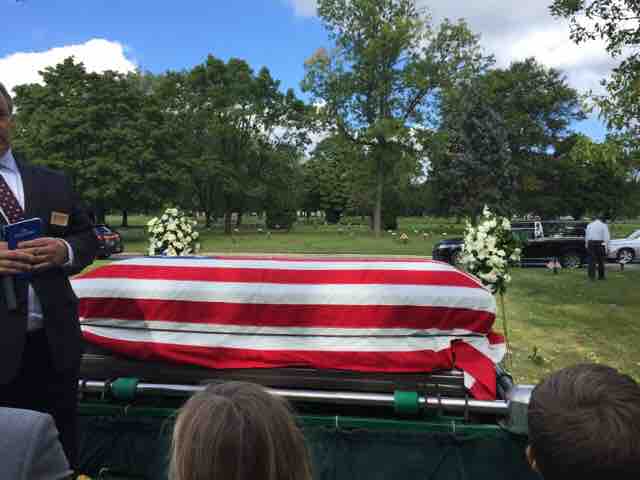 I was home for 6 overnight hours between the funeral and my trip to Virginia to surprise my bestie for her 40th birthday.  I think the stress of the funeral and the knowledge that I wouldn't get to do my weekend long run combined to lead me to the crazy decision to run my 6 mile hill loop solo at about 4:30 in the morning.  I probably should have slept, but I knew I could sleep some on the plane, so I busted it out.  Another good choice I think.


The birthday surprise was great.  Her husband picked me up at the airport, and I worked from the alumni lounge of the law school for a couple hours before he was ready to go home.  Unfortunately, we were a little late (bad traffic), so she was already home when we got there.  He told me to wait in the car a few minutes and then come in.  I did.  Her twins were downstairs and they were in on the surprise.  One of them went upstairs and I followed, and the other one came behind me.  Biggest regret was not giving one of them my phone to make a video.  I walked into their kitchen and her back was turned to me so I walked right up to her and tapped her on the shoulder.


She screamed so loud, mostly startled it was not one of her kids.  Then she screamed even more two more times (while doing a funny running in place/jumping motion) when she realized it was me!  Such an awesome surprise!!!


Her sister and another friend of ours (who brought her whole family) also came in that afternoon/evening, though she didn't do any more screaming.  Her son actually blew the final surprise guest less than 10 minutes before the family arrived, but even if she didn't get the surprise, she certainly got the joy.


We went out for dinner Friday night (P38) and then went out for donuts for dessert -- not a Charlottesville thing when I lived there, but so good!! 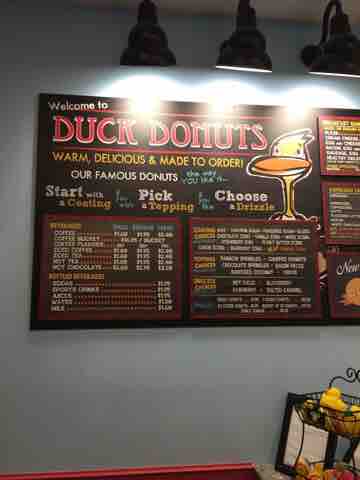 After dessert, we went home (all 10 of us staying in my bestie's house, which is not huge for her family of 4, but it worked out just fine) and then stayed up very, very late (past 2) playing Settlers of Catan.


Saturday was crazy -- 15 continuous hours of drinking, which I haven't done in ages.  Her husband set up an SUV and driver to take us women to a bunch of wineries during the day.  The day was so much fun.  About 4 vineyards and 1 brewery, and so much laughing and fun.  The scenery was so beautiful I couldn't help but take pictures from the car even! 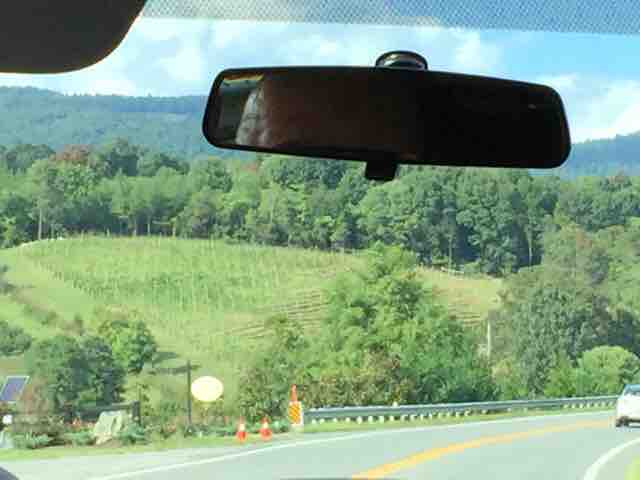 We got home and then headed out for dinner with the guys.  Dinner was great, at her fave restaurant in Charlottesville (Tavola).  Then she and her husband went for a drink on their own, while a few of the rest of us headed to the Downtown Mall to go back to some law school bars we'd liked.  Then they met up with us and we stayed out for a long time -- past midnight, but no idea beyond that.  Back at the house, we played Apples to Apples and sat talking (and drinking, and singing) until about 3 a.m.


Sunday morning I got up and did a hilly 4 Virginia miles.  Yow!  I don't think this photo captures the hilliness well, but I basically ran on this little gravel path to the left of the power lines (plus a bit on hilly roads).  Lovely, but I had to walk up some of the steepest inclines. 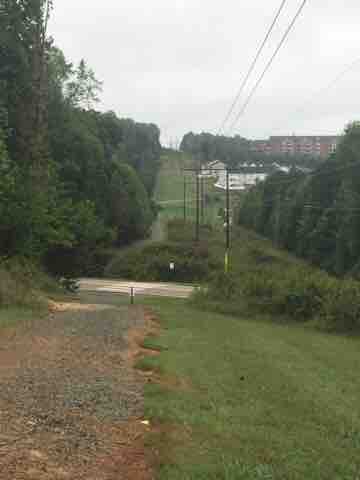 And then flew to Colorado for work.  The exciting part about that was that I made the next level of airline status, and got upgraded to first class.  I decided to keep the wine going, since I knew I'd be going out for a drink (or three as it turned out) in Colorado. 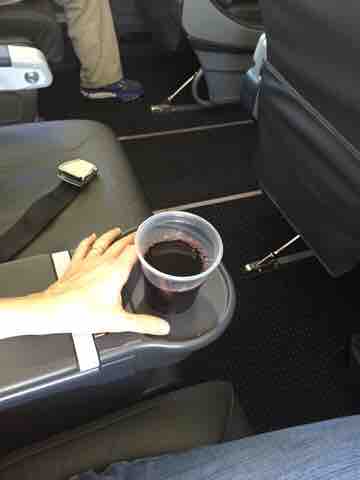 Worked (and ran) there a couple days.  My hotel provided a jogging map (though it only went up to 8 miles round trip, so I had to improvise, but it was easy since the trail went well past my U-turn point). I ran the Cherry Creek trail and it was amazing.  Ped/bike path along the creek for a couple miles (and therefore under all the streets, so no stop lights).  Then a half mile stretch or so on the streets, then back onto a trail, again, with no street crossings. 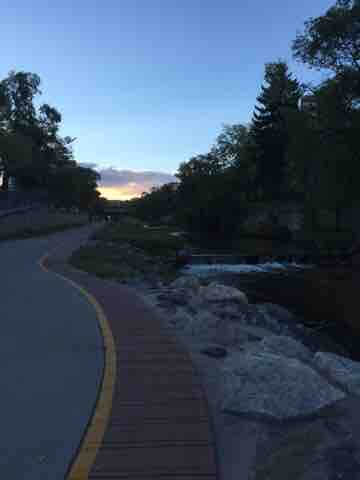 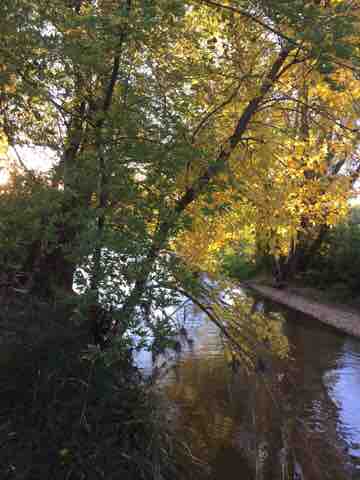 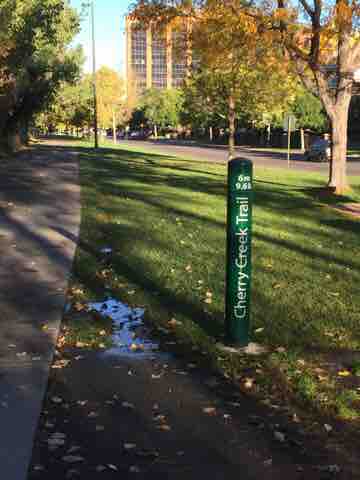 And then I worked in Denver.  My view from the federal courthouse: 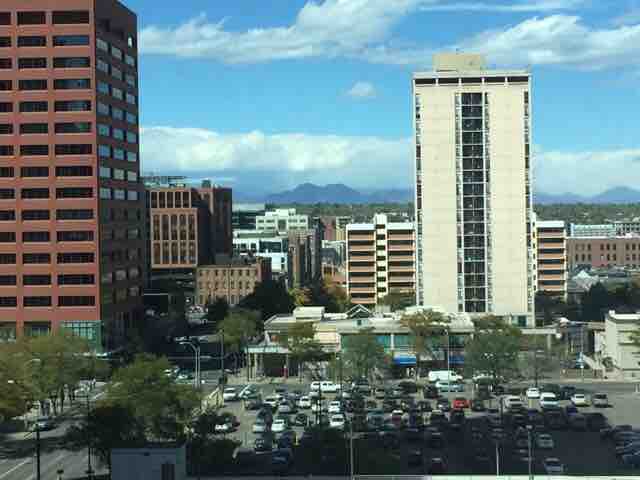 The good part about being in court (as opposed to a mediator's office) is that there's pressure to close at 5, which meant we got to go to wine hour at the hotel before dinner, and they had free massages in the lobby during wine hour, which I greatly enjoyed. 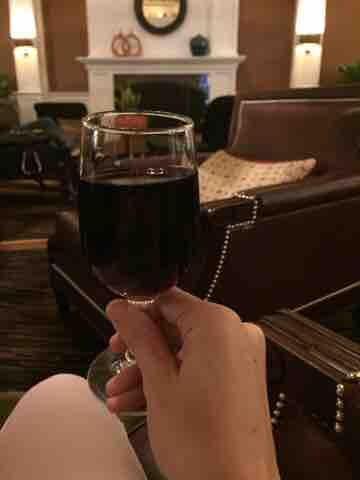 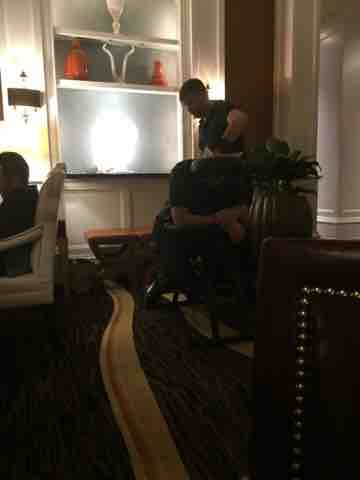 For dinner, we went to Ophelia's, which was in a historic building that used to be a brothel! 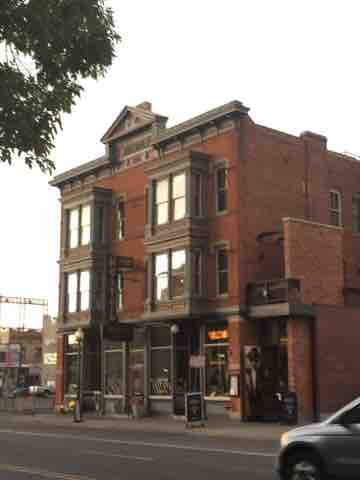 Next door was a pot store and my colleague wanted to go in and check it out. 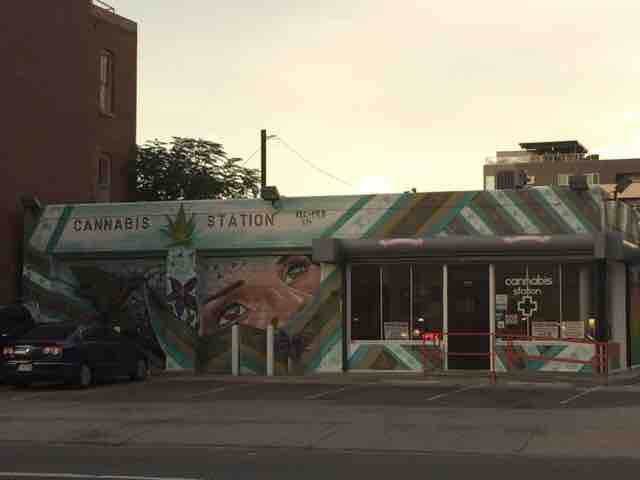 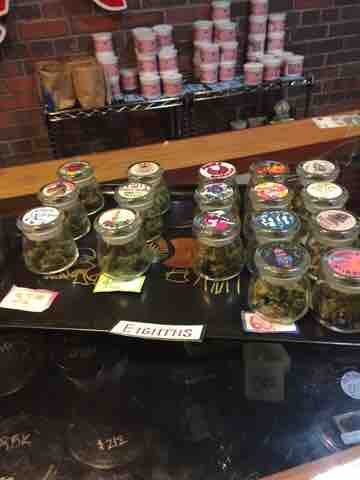 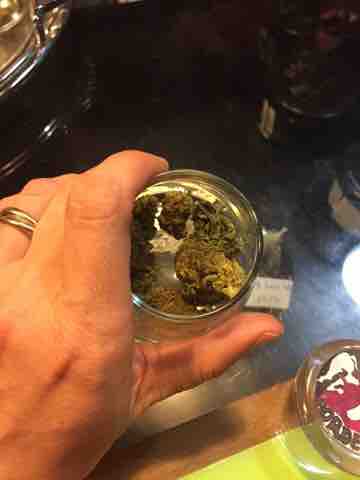 Obviously no purchases.  We were only in the shop a couple minutes, I didn't like the smell.
And then, after I was done working, another upgrade!!! 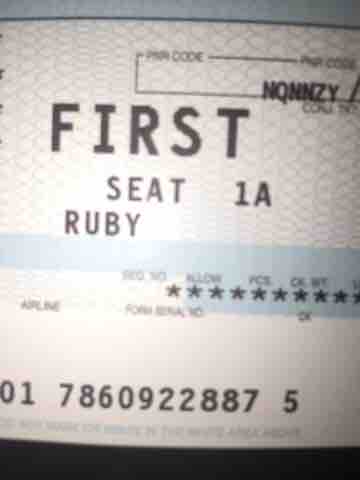 Fortunately, I'm local now for at least a few days.  Much needed time at home.
Posted by Carina at 6:37 AM 1 comment: