Well, I survived.  Marathon number 19? 20? is in the books.  Drove to Houston on Saturday, drove home yesterday.  Ran a marathon in between. 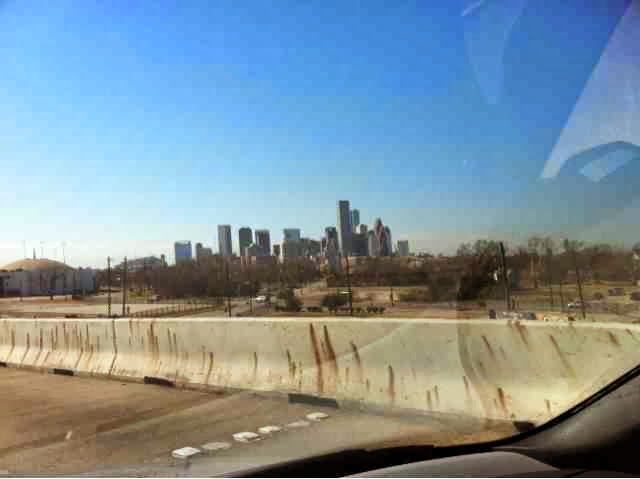 I finished about 30 minutes slower than I did Berlin less than four months ago, which I think HAS to be some kind of record, particularly since the course in Houston was great and the weather was good (when I ran San Antonio in November, that was more than 45 minutes slower than Berlin, but it was also hot, hot, hot, and I had no intention of running hard even if the weather had been perfect). But given my lackluster month of training lately, I was fine with 30 minutes slower than Berlin. My plan of walking up the hills was a total fail. There just weren't any hills in the first 20 or so miles -- there was one at mile 12, and I walked it. But other than that, I had to just keep running, waiting for another hill.

Weather before heading to the start (I don't know where Humble is, I swear, I was downtown).  Unfortunately, I didn't capture the screenshot that showed 100% humidity, but it really didn't feel that bad: 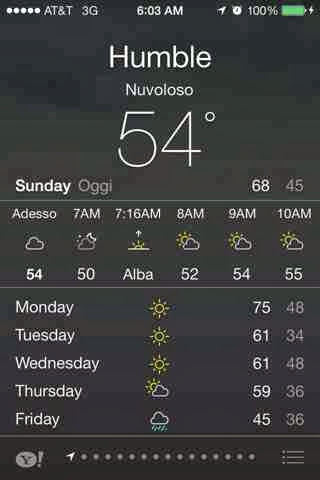 The race itself was great.  The course reminded me of NYC in many ways -- lots of spectators, and very flat until about mile 20, then a few rollers.  Any "rollers" after mile 20 feel like mountains, but in reality, these weren't too bad.  It was a total of 3-4 (plus the 1 at mile 12) overpasses or underpasses.  At one point, it seemed we were running on an actual part of interstate or off-ramp, but instead of being miserable and ugly like San Antonio, it was actually kind of cool.  Overall, I was very impressed with the course and if the timing was different, I could see it being a race I'd run again and again in hopes of a PR -- but the bottom line is that I did not like training in December and January.  It meant my schedule didn't line up with my buddies', and I was driven to the treadmill when I was home and surrounded by many feet of snow.  So we'll see if I ever do it again. 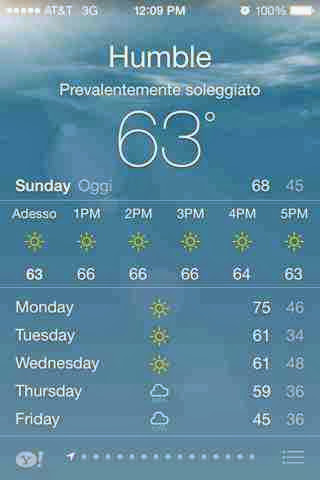 My critiques of the race:

But in reality, those are pretty minor things.  The race was very well-done.  Lots of volunteers who were helpful everywhere, on the course, at the expo, in the finisher building.  One of the other good things about the race was that you were funnelled into the convention center after the race.  There was room to stretch, a place to pick up your finisher shirt (and a glass small beer stein-style mug), to get water and bananas and cookies and ice cream, then a separate place for breakfast (all I got was a biscuit because it was eggs, sausage, gravy with meat).  I stayed at a hotel downtown so it was an easy walk for me to and from the expo, to the start line, and then back to my hotel from the finish. The best sign I saw along the course was actually a shirt (worn by a guy probably in his 20s), and I could only imagine the conversations and thought processes behind it:  SHOW YOUR LAZY SON HOW IT'S DONE.  A bunch of the spectators were in multiple places (a guy hitting a bell with a stick was in three places), so I hoped I'd see that guy again so I could tell him that I liked it, but I didn't.

There were a bunch of good signs.  One that made me laugh was "what does the fox say?  Run-run-run, run-run-run-run."  "You might be tired but my arms are exhausted from holding this sign."  "I ran once.  It was horrible."  "You are the best at exercising." -- that one actually made me chuckle for probably a full minute after I passed it.  There were also several "go random stranger, go!" signs that made me laugh, as well as several others I'm not remembering right now.  There was also one particular runner near me for much of the race who was very funny.  Everytime a spectator yelled, "looking good", he'd say "you too" and occasionally ask if they were single.

At the expo, I waited in line to see my favorite runner ever, Meb.  I told him that I'd met him last year in Dallas, and I wished him luck.  I bought another copy of his book because my copy hadn't been signed, so now I have an autographed copy.  I was so excited when I got back to my hotel to see that he won the US half-marathon championships, with a time of 1:01 and change.  Yes, at age 38, he is still killing it!  He's so amazing and inspirational.

Here he is, less than 24 hours away from kicking @ss: 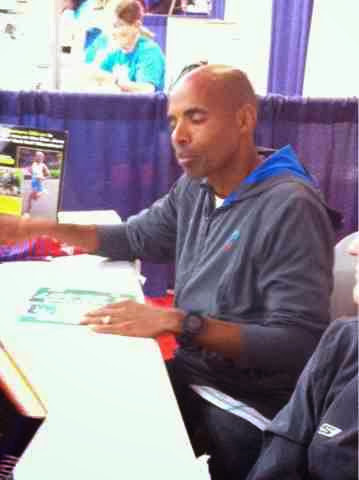 After the race, I walked back to the hotel, relaxed a bit, showered, packed up, and then drove back to Dallas.  I was so glad they gave me a late check-out.  Little things that make life SO much easier and better.  Big statue of Sam Houston along 45 on the drive home: 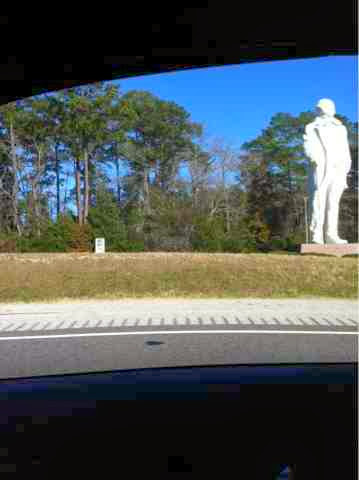 But now it's Monday, back in Dallas, and back to work.  This week is going to be weird.  Reduced staff and we roll over to a new system, which is probably going to be painful...


Quick and Easy Questions
1. What time did you go to bed last night?  About 8:15.  And I slept until 6:30.  Marathons are exhausting! I was so excited that I woke up without an alarm.  To me, that meant I slept enough.

2. What is the last thing that made you smile?  I was smiles for a lot of the day yesterday.  People calling my name during the race (sometimes it was more of a grimace I guess), but the funny signs I mentioned above, the nice comments I got on FB, reading about my friends who ran some of whom had AMAZING races, getting home and having my husband be so happy to see me.

3. What is the last movie you watched?  Can I cheat and say the movie I want to watch?  Flowers in the Attic.  It was on Lifetime sometime in the last week and I read all those books and really want to watch it (it's waiting on our DVR for me for this weekend I hope!).  Not sure of the last movie I watched on TV or Netflix.  In the theater, it was The Secret Life of Walter Mitty over Christmas.

4. What did you have for breakfast today? I am just now finishing my usual breakfast smoothie.  I'm also enjoying one of my last four pieces of stollen, a German Christmas bread my mom makes.  Coffee is next while I get ready for work.

5. Would you rather mop all of your floors or do laundry?  Not sure.  I do laundry, husband does mopping (I do vaccuuming).  I think laundry is fine, but I bet mopping floors is faster.

6. Do you drink coffee? I'm picky.  I'll drink espresso at home if my husband makes it, and I'll drink it in Italy at a bar or relatives' homes, but never coffee and never anywhere other than home in the US.  At home, we use a mocha for our espresso: 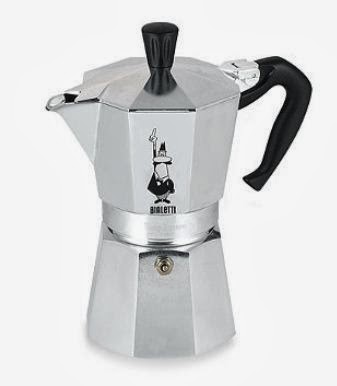 7. Will you watch the Superbowl?  Maybe, I couldn't care less about football but sometimes the commercials are fun.

8. How often do you shop for groceries?  Never.  Well, less than twice a year.  Husband goes about once a week, sometimes twice.

9. What kind of workout will you do today? NONE!  Resting from yesterday's marathon.  Tomorrow I may go for an easy 6 miles, Wednesday I will go back to boot camp.

10. Do you use a fitness tracker? I have a Jawbone Up.  It's kind of fun.  I use my Garmin to track all my running miles, but this is fun to see non-running steps.  I'm so sedentary when I'm not working out, sometimes it motivates me to move around more.

Now it’s your turn to answer this week’s questions. Don’t forget to come back and link up in the comments! Happy Monday!
Posted by Carina at 8:41 AM