As I said earlier, I resolved to cook 52 recipes from scratch in 2013, and I'm going to try to keep track of most of them.

If any recipe in particular sounds good, let me know and I'll either post it or scan and email it to you.

1.  1-8-13:  Sweet potato and butternut squash stew, in crockpot, from Fresh from the Vegetarian Slow Cooker, added black beans (leftovers w/o beans eaten on 3 occasions, once as a meal, twice on the side)

2.  1-13-13:  Homemade whole wheat pizza dough, top your own pizza, cooked on the grill, recipe from a friend (had two dinner guests this evening) (recipe makes 8 crusts, froze 2, we each ate one at dinner, so had 2 leftover for dinner the next night)

2A.  1-30-13:  Chickpea apricot from a blog (maybe HealthyTippingPoint or OnAnnasPlate?).  Not sure this counts (which is why it's 2A and not 3).  I chose the recipe, made the grocery list, but then hubby actually made the recipe since I was stuck at work.  And he kind of screwed it up (as in, omitted all 4 cups of vegetable broth).  But it was still insanely good.  And if I'd been able to leave work at a reasonable time or if the recipe hadn't taken nearly an hour, I would have made it.  And even if he does the cooking, it meets my goal of a meal made at home from scratch and yielding leftovers.

3.  2-3-13:  Breadcrumb pasta from Pinterest (breadcrumbs, olive oil, lemon juice and parsley, mixed with pasta).  This barely counts as following a recipe since I used pre-made breadcrumbs, didn't really follow quantities, and could have thought of this myself, but I looked at the recipe a few times and I'm counting it (especially since I didn't count the recipe above from last week).

4.  2-4-13:  Sweet and spicy lentil chili, in crockpot, from Fresh from the Vegetarian Slow Cooker.  I followed the recipe exactly, but the lentils didn't taste completely cooked.  Thumbs down.  Maybe it was because we used French Green lentils?  Hubby isn't picky, so he ate most of the leftovers.

4A.  2-17-13:  Waffles, from the recipe book that came with the waffle maker.  This barely counts, but I was following the recipe (subbed in some whole wheat flour, and half of the milk was soy milk), and it's not something I could have done without the recipe.  So I figured it would count until I reread my actual 2013 resolution, which related to cooking DINNERS from recipes.  So another recipe that doesn't count...

6. 2-17-13:  Orzo with roasted eggplant and cinnamon-cumin dressing.  A recipe I've made before, but worth repeating.  We were out of white balsalmic vinegar, so I used regular, and I used whole wheat orzo.  Very good I'd say.  And it got me to eat eggplant, which is not in my usual veggie rotation.

7.  2-24-13:  Winter vegetable risotto, from 1,001 Low Fat Vegetarian Recipes.  Typical risotto so lots of stirring involved (made me love my cushioned kitchen mat that was a bday present from hubby a few years ago), this one featured sweet potatoes, brussels sprouts and mushrooms.  Quite good.  Our neighbors came over for dinner and also seemed to like it.

9.  3-1-13:  Butternut squash apple soup from no particular source.  I have been assembling a personal recipe binder and in it, I had two printed recipes for this soup, each with some slight variation.  Since one of our dinner guests this night couldn't do dairy, I found a third recipe online and kind of combined the three.  It was good but I thought I would have enjoyed it more with more squash and less cinnamon.  Hubby and I ate this soup in a restaurant once and it was divine, I dream of recreating that exact recipe.  Maybe it will have to be with dairy.  This soup used squash and apples, plus vegetable broth, water and soy milk, and then salt, pepper and cinnamon (I forgot to include the parsley).

10.  3-1-13:  Red wine mushrooms over potato cauliflower mash, recipe from On Anna's Plate here, a blog I read pretty regularly.  The recipe didn't say how many it served, and I decided to roughly triple it, since we had 6 people total for dinner.  It was a ton of mushrooms and way too much liquid -- and I didn't even use all the broth listed in the recipe.  But fortunately, I started the recipe early, thinking I'd cook it all and reheat it before we ate.  Instead, I spent a couple hours boiling it down -- but the end result of the mushrooms was SO GOOD!  I wasn't wild about the potato-cauliflower mash.  It was just too bland, and hubby agreed.

Figured I'd share this list in batches, and this is all I've done so far.  But on track to meet my resolution, which is nice in many ways.  It was a good choice for a resolution. 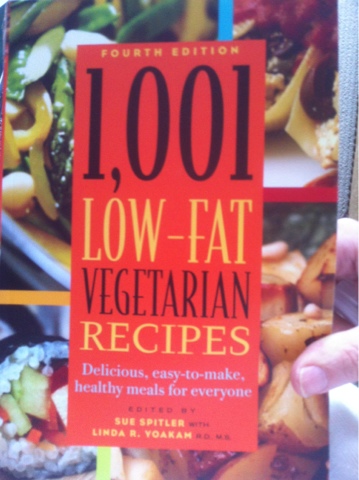