Wow, can you believe the Tian'anmen Square standoff was 25 years ago yesterday?  I heard that on the news and it was surprising.  I wasn't exactly politically aware at the time, but it was maybe the start?  It's definitely one of the first events on the news that I remember.

Other memories of significant news events before I really started paying attention:  Oliver North's testimony (my parents watched a lot of it), the Challenger explosion (I watched live in elementary school), the Berlin Wall coming down (I was babysitting and it was on the front page of the paper sitting on their coffee table, and it was on the news when I turned on their TV), and obviously OJ.

I paid some attention to the news in junior high since my history teacher gave us quizzes about current events, but not much of it stuck with me.  Regardless, I remember that on June 4, 1989, I was slowly starting to understand more about the broader world.

This is what the Today Show said about it on Wednesday morning to mark the anniversary:


"Today marks the 25th anniversary of the Tian'anmen Square massacre and there is heavy security in central Beijing.  As tanks rolled in on June 4, 1989, Chinese troops opened fire on student protesters.  More than a million demonstrators had gathered in central Beijing in the lead-up to the incident.  Video of a lone protestor standing in front of a line of moving tanks became one of the 20th century's most powerful symbols.  The exact death toll is unknown but is widely believed to be in the hundreds."


Twenty-five years ago today, the Chinese People's Liberation Army (PLA) violently cleared Beijing's Tiananmen Square of protesters, ending a six-week demonstration that had called for democracy and widespread political reform. The protests began in April of 1989, gaining support as initial government reactions included concessions. Martial law was declared on May 20, troops were mobilized, and from the night of June 3 through the early morning of June 4, the PLA pushed into Tiananmen Square, crushing some protesters and firing on many others. The exact number killed may never be known, but estimates range from several hundred to several thousand. China's censors are blocking Internet access to the terms "six four," "candle," and "never forget," broadening extensive efforts to silence talk about the 25th anniversary of China's bloody June 4 crackdown.


And that Atlantic article I linked actually has some really amazing photos if you have a moment to check them out.

Two sides to every story?  I don't know.  I have very complicated feelings about China now, more complicated actually since we visited.  Things seemed much more straight-forward sitting in the US and thinking about theories.

But one thing that remains crystal clear to me is that the remarkability of the fact that apparently most people in China today do not know what the image of the man standing before the tank signifies when shown photos.   Students in the universities today and young adults particularly have no knowledge of these events.  It's amazing how much a free press and free speech can do in terms of preserving a national recollection of significant events.  The concept of having those search terms blocked really boggles my mind in ways.  Given the new EU laws about "erasing" parts of the internet for individuals, coupled with our reliance on the internet, makes me wonder how easily we could go down this path of altered history ourselves, particularly as Holocaust survivors and now their children pass away.  That's another tangent completely.

Any memories of June 4, 1989?  Other big news events memorable from your youth?  (I'm usually not one to pose questions directly as those who comment generally have something interesting to say without a prompt, but I'm particularly interested in this!)

In honor of the anniversary, some of our photos of Tian'anmen Square from our trip there in 2012, to date, one of the most interesting trips of my life, fully recapped on the blog in the fall of 2013 I think. 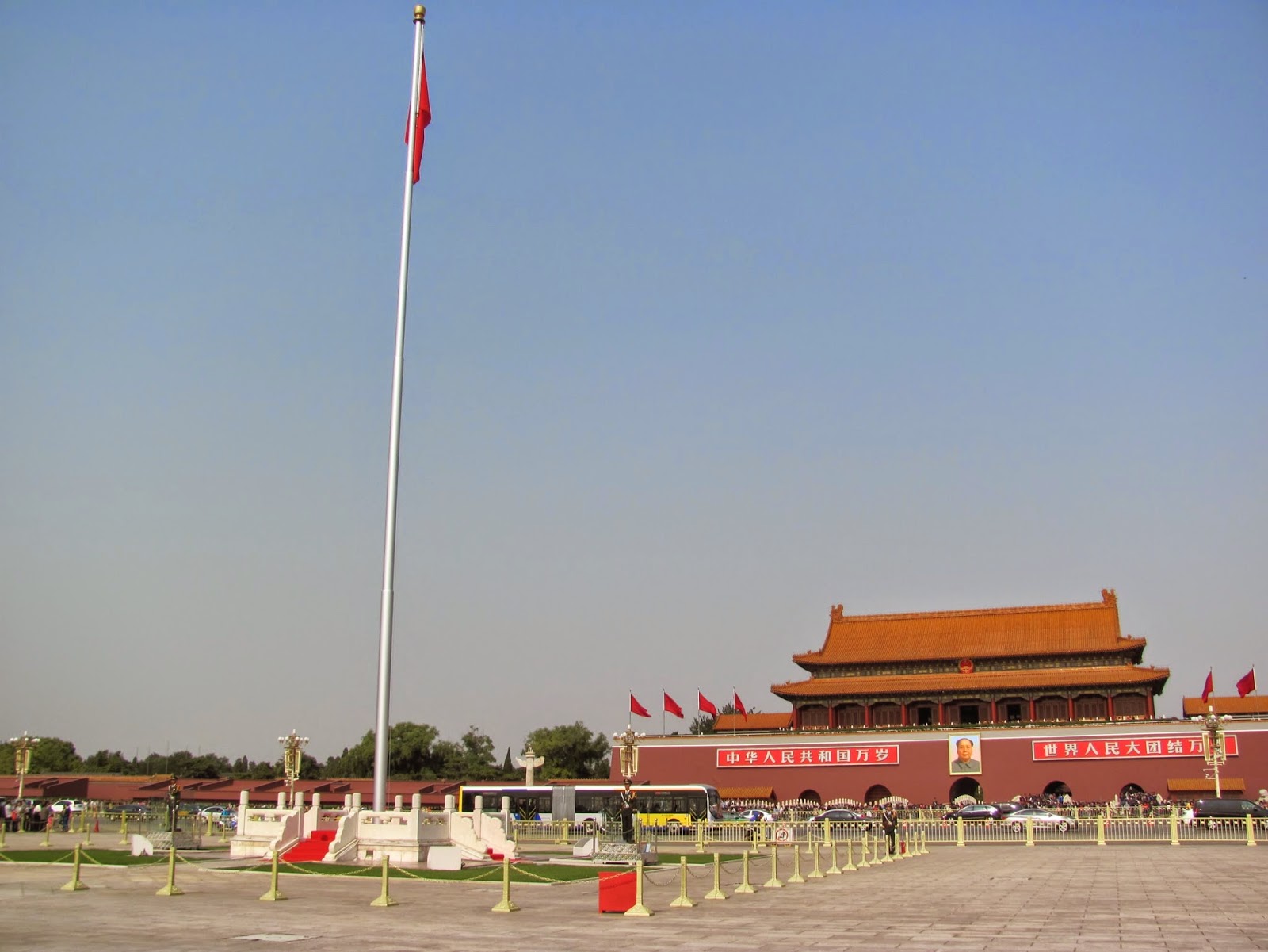 The entire square is surrounded by massive buildings like these two below.  The square was build in the 1600s, but enlarged to its current size in the 1950s. The "Ten Great Buildings" along the square were also built then.  It reminded very much of the National Mall in DC, with the massive Smithsonian museums set off along the boundary roads.  It also reminded me a lot of Red Square, but bigger.  I believe Tiananmen Square is designed to accommodate more than 500,000 people at once.  Can't remember what the first building I photographed around the square is, but the second is the National Museum of China: 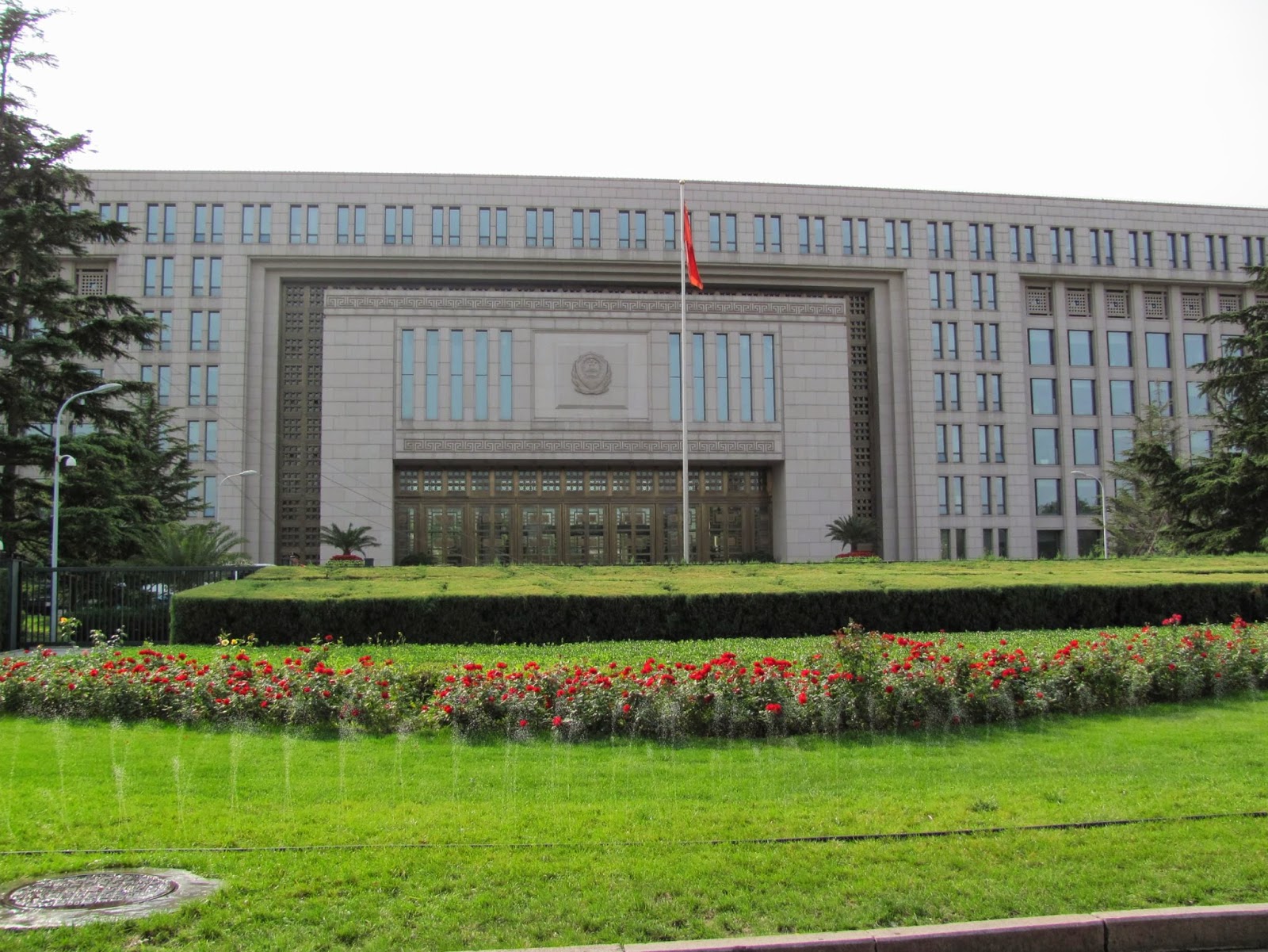 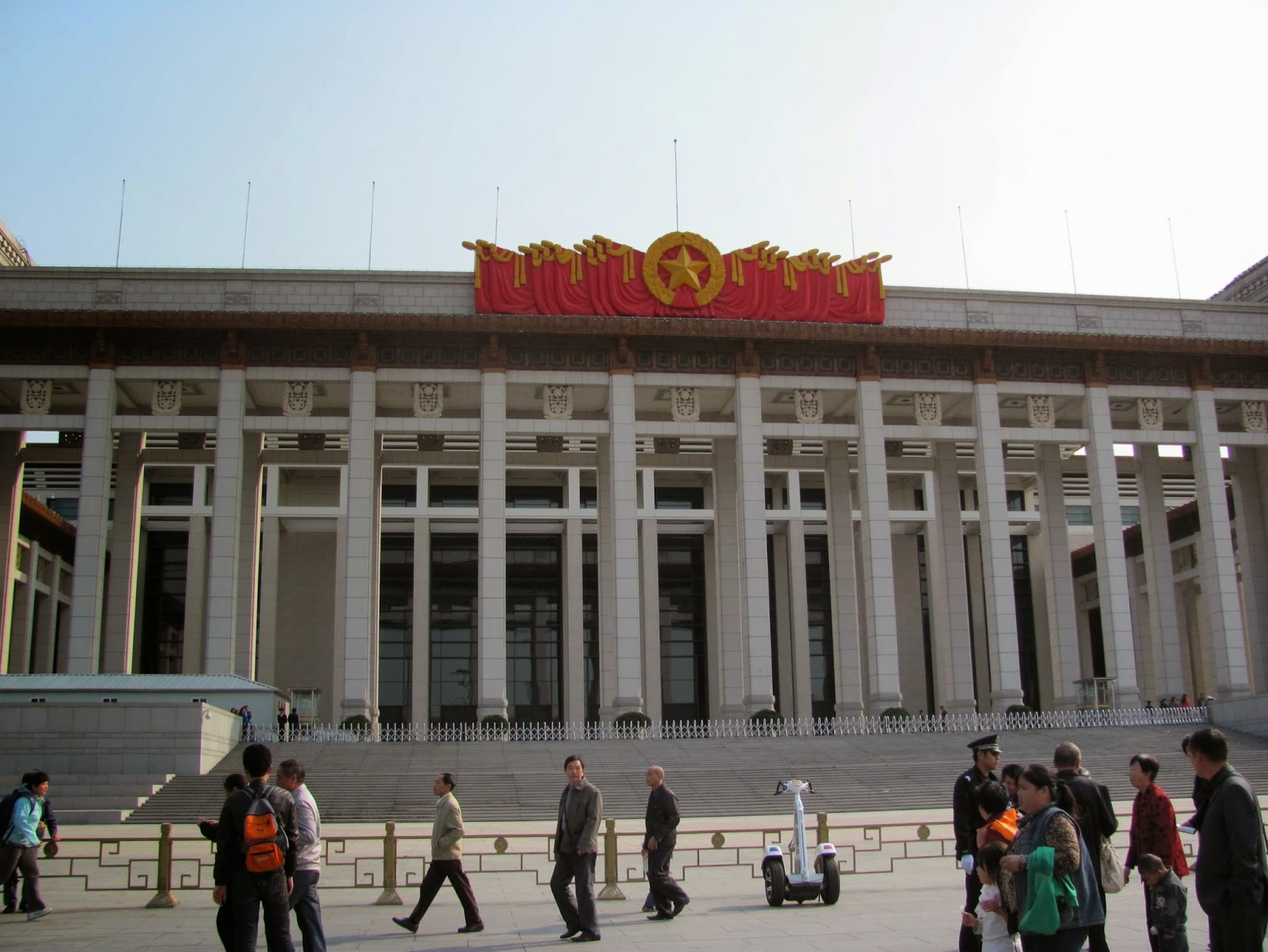 There was a heavy uniformed police presence standing guard, marching about, and mingling with the visitors.  And I got the sense there were plenty of official personnel not in uniform as well.  Of course I took pictures of the guards, which are perfect to show today (well, technically the anniversary was yesterday, but it's my recap post):  ﻿ 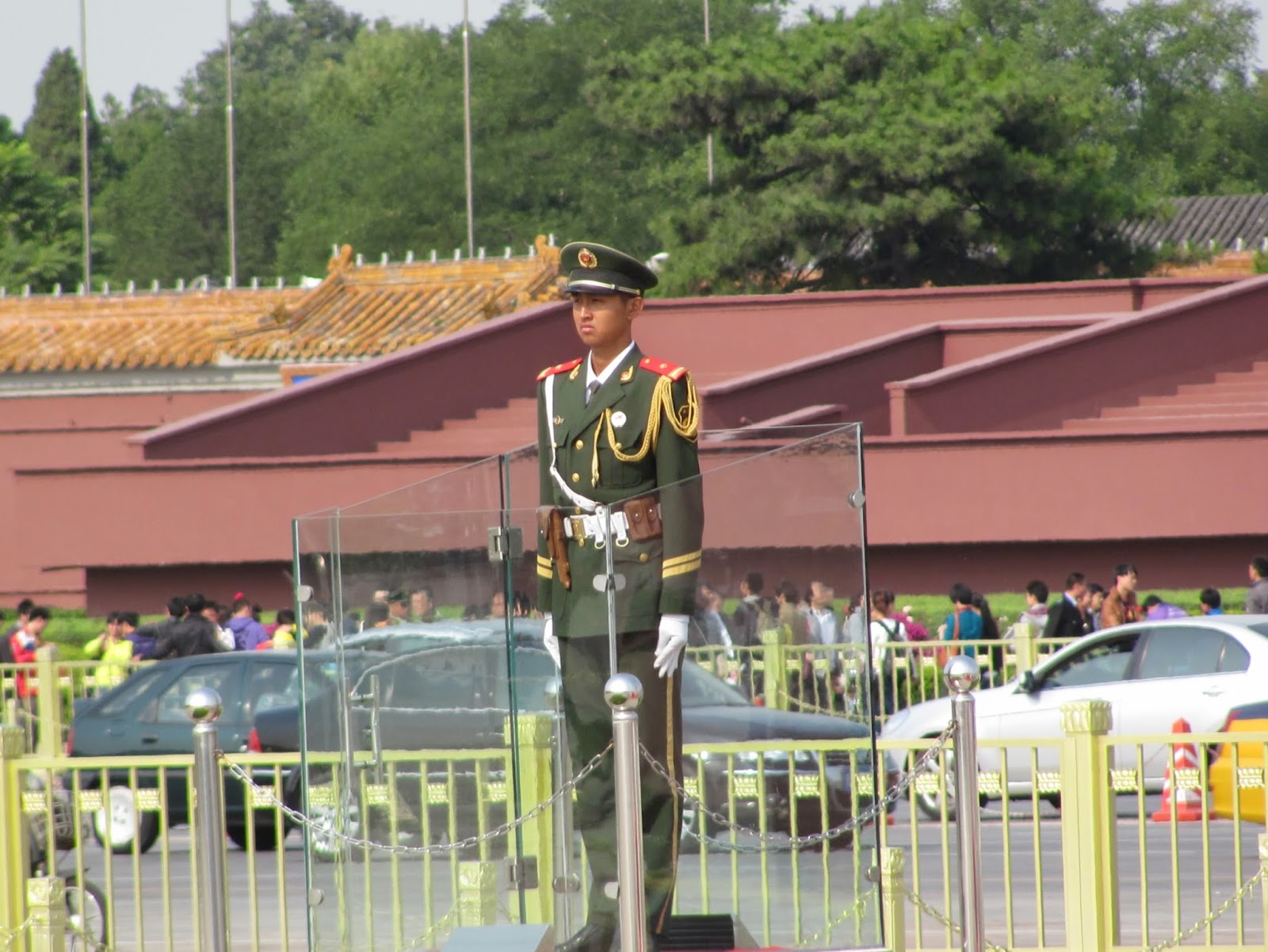 There were also these huge floral displays in the square.  Huge.  You can kind of see a little head down in the corner (if we'd walked directly into a cutout of the display, I'm guessing my head would have been somewhere in the red swirl of flowers on the base), and I'm bad at guessing size, but I'd guess this one was at least two stories tall: 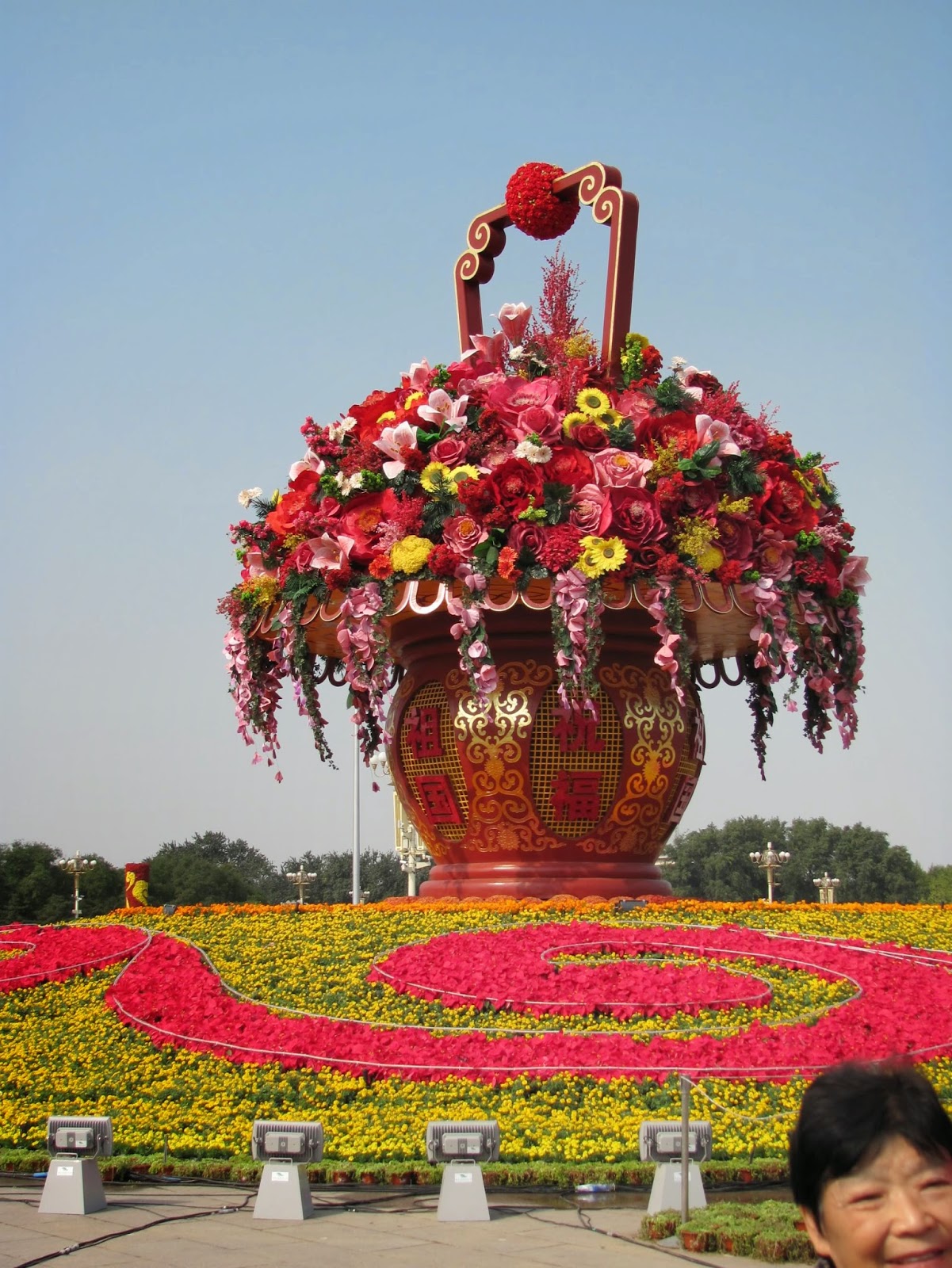 I didn't get to take any pictures inside Mao's tomb, which is also there at the square.  Here is a shot of Mao's mausoleum.  Hard to see among the crowds and from this distance, but there is an hours-long line all the way around the perimeter (some scamster who wanted (and got) money from us after helping us get to bag drop and through security, snuck us in toward the front of the line, so we only had to wait about half an hour to see Mao's preserved body, but we bypassed at least 75% of the line): 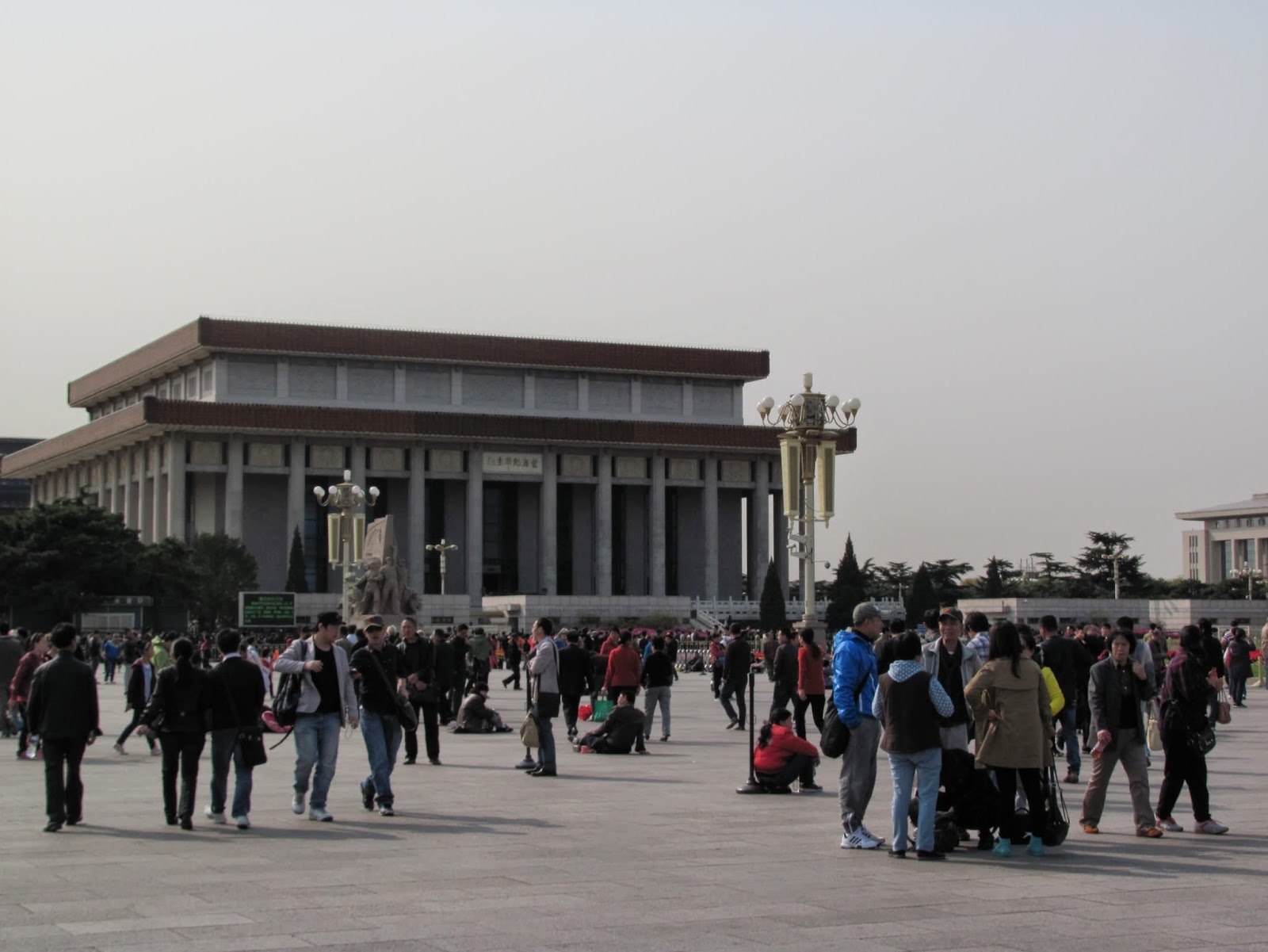 Plenty of pictures/busts of Mao in the immediate area however: 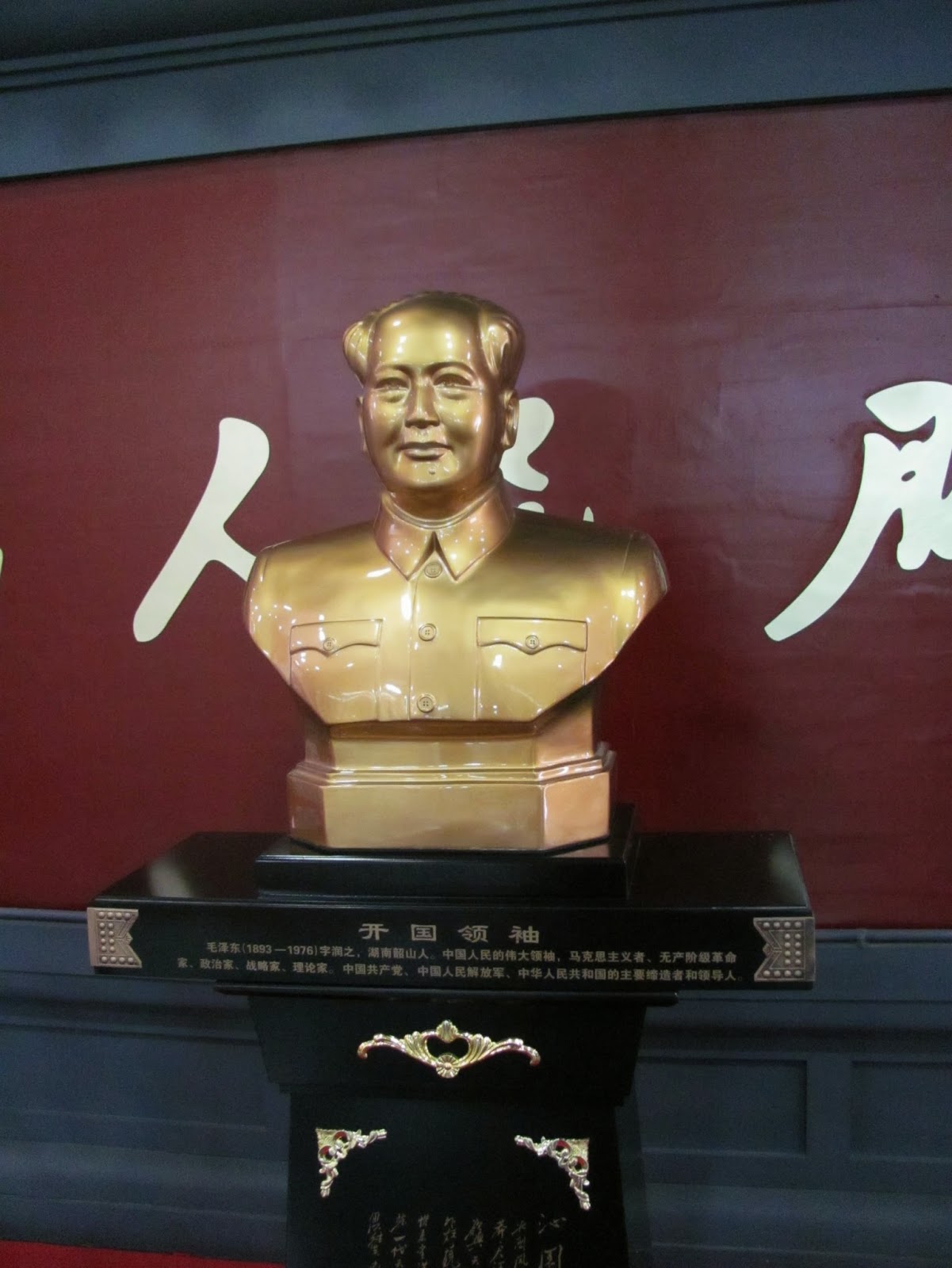 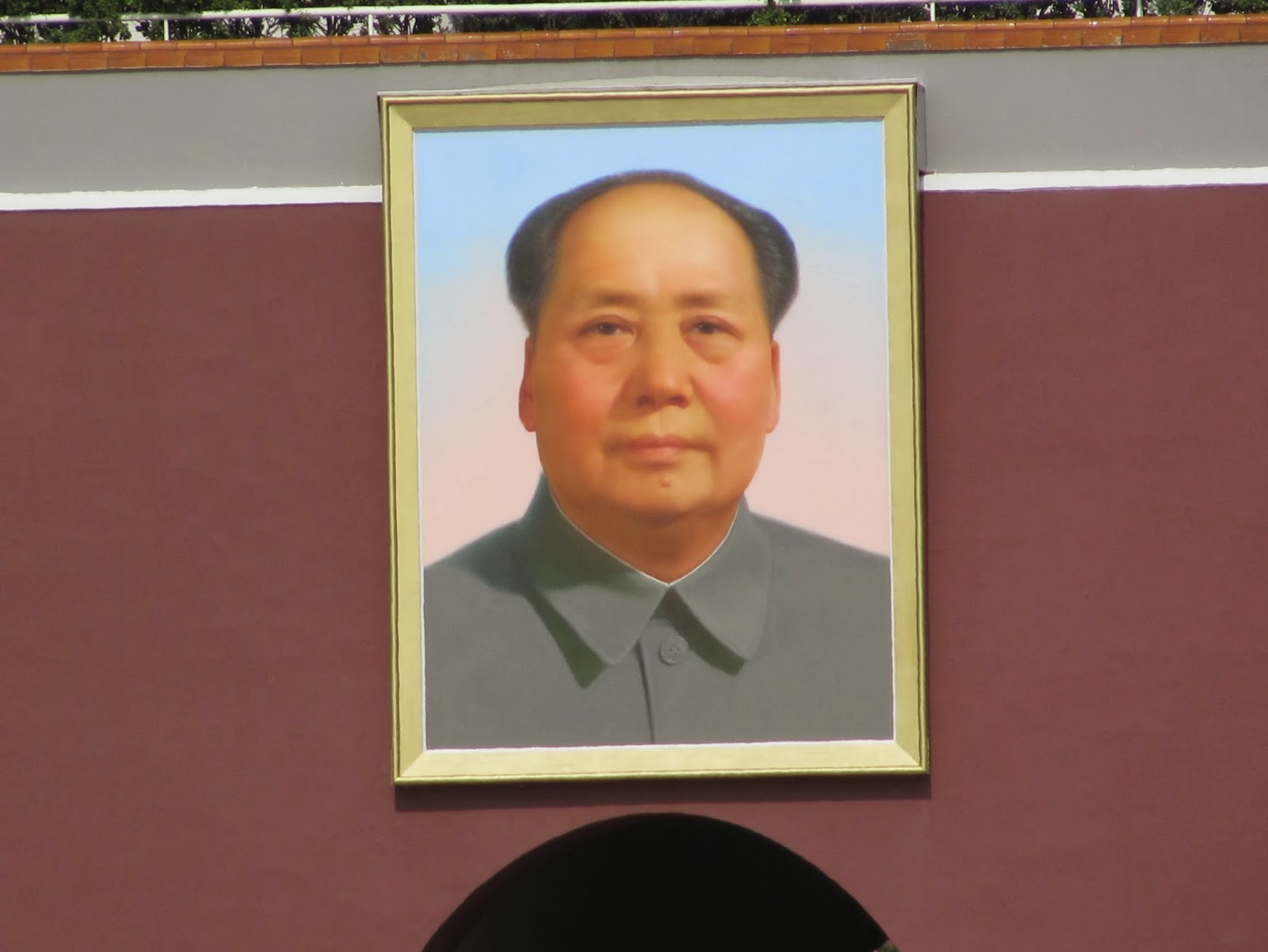 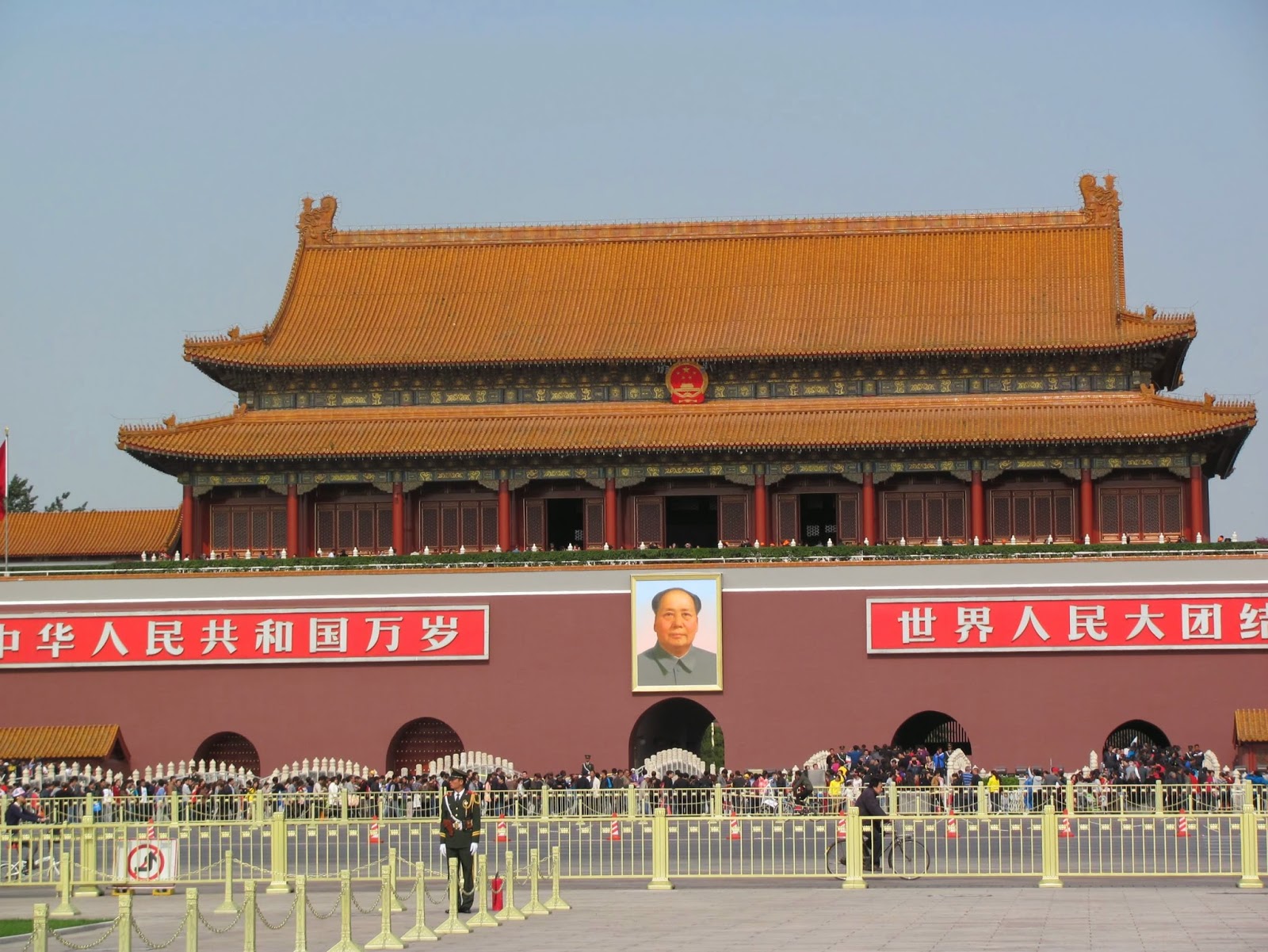 And a couple pictures just to show the scale of the flowers, buildings, length, towering floral columns: 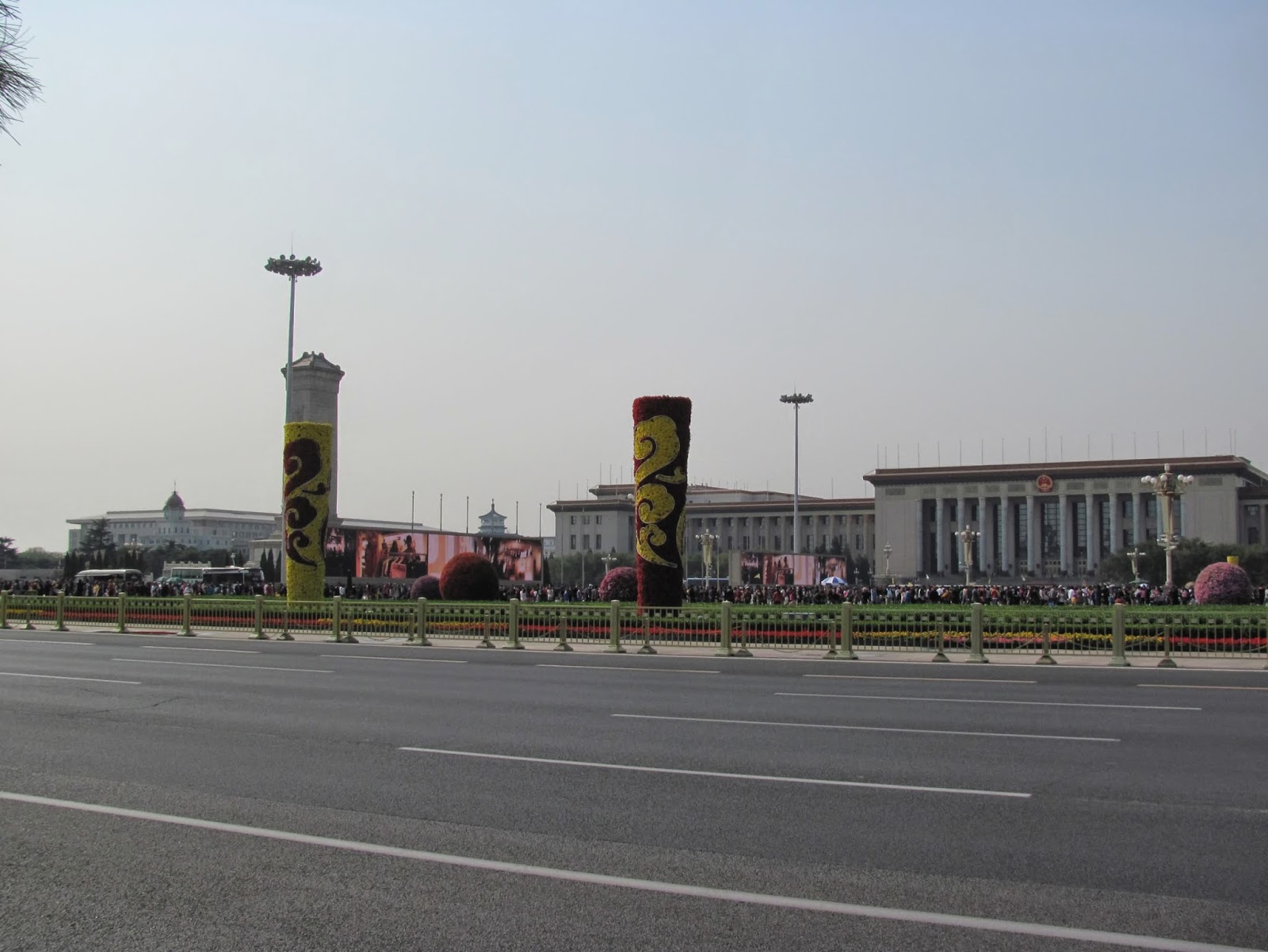 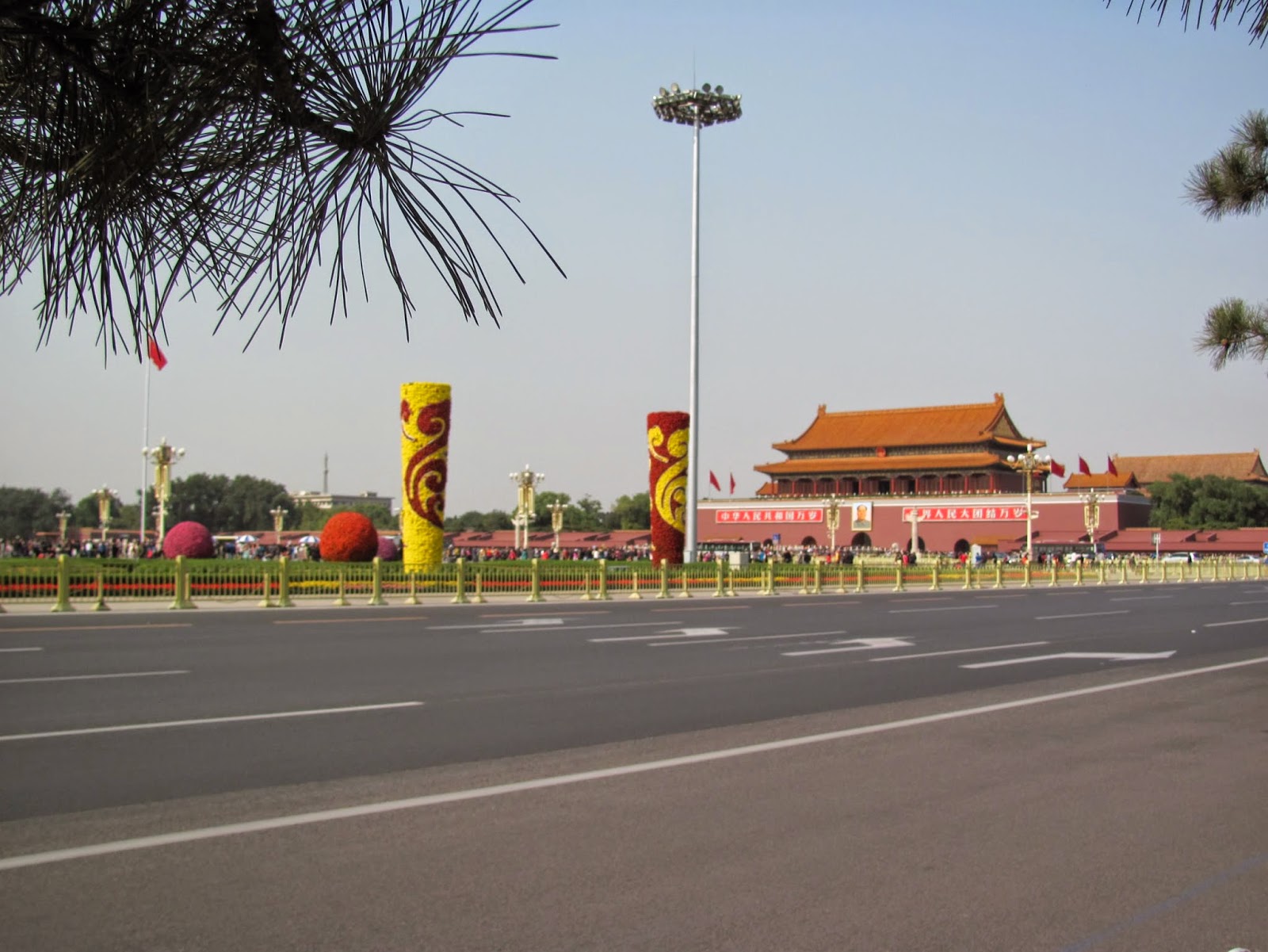 Apparently (according to Wiki), only 5 photographers were able to have their photos smuggled out of China and published in the aftermath of the protests and the standoff with the tanks.  One photographer had a French student smuggle the film in a cannister of tea.  One hid his in the toilet and sacrificed two rolls of film showing wounded protesters when the police searched his hotel room.  Crazy stuff I tell you.  ﻿
Posted by Carina at 7:05 AM