FMM: In the Kitchen

This was an awesome and fairly low-key weekend.

Friday I got done with work early, so we went to see the Bourne Legacy movie, thenb accepted a last minute dinner invitation with a few people.

Saturday was sleeping in, yoga, errands, volunteering for a couple hours, and making a big pasta dinner, my usual Saturday night routine to be ready for a long run on Sunday.

Yesterday's long run (17 miles) was perhaps the highlight of the weekend.  After having such a horrible 15 miler the prior weekend, I really needed a solid run to boost my confidence.  I think 80% of the credit goes to the weather.  It was actually down into the 70s and the humdity was in the 60s and there were some clouds.  That was all I needed.

A couple notable things on the run -- loose dogs nearly gave me a heart attack, especially since we thought one might have been a pit bull.  We were kind of running in the hood part of the time.  But the dogs completely ignored us, thank goodness.  And I've been sucking on ice cubes in yoga so when I encountered bags of ice on the run today at mile 13 or so, I put a big one in my mouth to suck on for a while.  I no longer feel like I have to spit it out because it's too cold or anything (though I did worry about tripping and choking).  But then maybe a mile later, I had major stomach cramps -- like to the point I thought I could have gone on "I Didn't Know I Was Pregnant."  I kept running, figuring I'd go to the next water break (about every 2 miles) and then bag it if necessary, but the feeling passed.  I wonder if the cold was just too much at that stage in the run?  Who knows.  All that mattered to me was that I felt solid and had a great long run.  Then I went home, watched (and blogged) the marathon, went to yoga, made a quiche for dinner during the week, made dinner, and started watching a Netflix movie (Stalingrad, only halfway done, and even for someone like me who loves WWII movies, including German ones, I wouldn't recommend this one).

So since it's Monday, here we go again, Friend Making Mondays!

If you’ve taken part in FMM then you know the rules. If you’re new, please take a moment to answer this week’s question on your own blog then add your link in the comments section at: www.alltheweigh.com so we can all see your FMM questions and answers. Please invite your blog readers to add their links here too so everyone has to opportunity to be seen. The idea is to connect with other awesome bloggers so take a moment to post your own FMM post and comment on a couple of other posts. Now it’s time for this week’s topic!

1. How often do you cook at home?  I guess it depends on how you define "cook."  If you count things like microwaving frozen vegetables, microwaving a homemade quiche, heating up those pre-made packets of Indian food that just take a couple minutes in the microwave, making a big salad, etc., making store-bought pasta with store-bought sauce, then I'd say almost every night.  After a crazy June of eating out, I tried to be better in July, and I'm trying even harder in August.  My schedule right now means I get home from yoga around 8:30, and since I get up at 5 or earlier, going out to dinner isn't really an option -- and I don't do fast food -- so I come home and scrounge up something quick.


2. Do you eat more fresh produce, frozen or canned produce?  Mostly fresh, but frozen sometimes when we're out of fresh stuff.  The only canned produce I eat -- occasionally artichoke hearts, hearts of palm, kernel corn, olives.


3. What are a few unusual staples that can always be found in your kitchen?  Spinach, frozen fruit, soy milk, English muffins, protein powder, Greek yogurt, grapes and apples.  For hubby, his staples are bananas, cherry tomatoes, and canned tuna.


4. Look in your fridge, then tell us about the healthiest thing in there.  I'd say most the stuff in there is pretty healthy -- I'll try to add a picture below.  Best foods:  Spinach, Greek yogurt, water.


5. Now share the most unhealthy thing in it.  Beer and vodka.  Followed by margarine and butter I guess.  Avocado is borderline -- could be healthy but I like to eat the whole thing, which isn't great.  And there are a lot of Lean Cuisine meals in the freezer that I can use in a pinch to take to work for lunch, or even for a quick dinner if necessary.


6. Do you eat leftovers?  Yes, whether home-made or from a doggie-bag.  I actually think being in Africa even for a short period of time changed my life in this regard -- I feel very strongly about not wasting food.  So many people have so little, it's not fair or right to waste what we have.  The pic I took of my fridge shows a big tupperware of leftover pasta from Saturday night, as well as the quiche I made to eat this week.


7. Do you use coupons at the supermarket? I don't grocery shop, but I'd say I give hubby coupons (usually the kind that print out with your store receipt) about 6 times a year, and he basically never uses them.


8. How often do you try new recipes?  Usually a couple times per month.  Last night I made something I found online called "Marge's Zucchini Pie."  No idea where I found it and no idea if it will be good.  I was looking for something with egg and/or cheese along with vegetables that I could quickly reheat for dinner every night after yoga.


9. Do you make grocery lists? Do you stick to them?  I always make a list for hubby of the non-recurring items we need (like if we're out of paper towels, or I want marinated artichokes for my salads that week), but I trust him to get the regular items.  Though he frequently forgets random stuff, I will say it used to really stress me out, but he's gotten better about remembering and I've gotten more relaxed about improvising.  And since we've started using a shared list app on our phones, he's near-perfect on the non-recurring items -- there's no longer a risk he'll overlook something I wrote out of order or that he meant to go back and get.  He crosses each thing off the app and it disappears, so he can see exactly what's left.


10. If you could buy one food item that would magically be calorie-free, which item would you choose?  I'll go with cake -- I basically killed half a cheesecake all by myself last week that was leftover from our dinner party, would have been nice if that had been calorie-free.

Now it’s your turn to answer this week’s questions. Don’t forget to come back and link up in the comments! Happy Monday, friends! 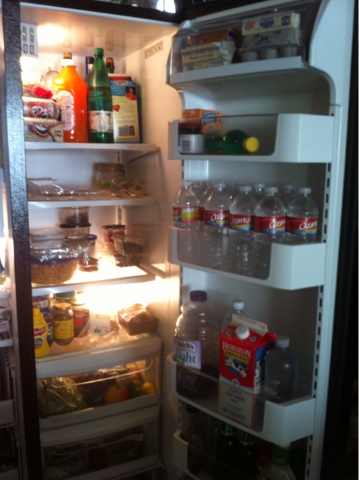 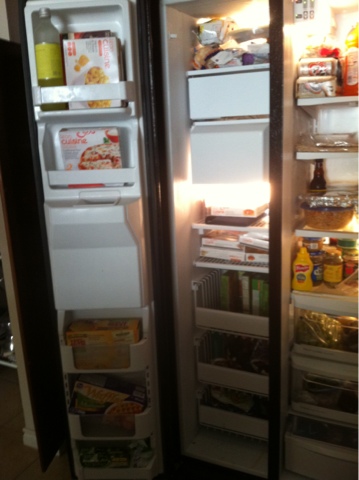 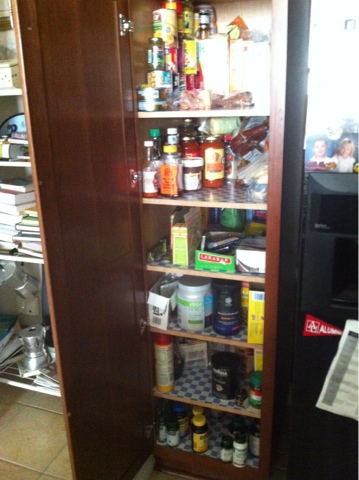