My husband and I have concluded, in our own expert medical opinions, that we are depressed.  We seriously both have the post-vacation blues.  First world problems, right?  But I'm writing here because it's actually real this time.  It has never happened like this before, despite the fact that we've taken foreign trips lasting at least two weeks for at least the last decade.


We are both in a rut right now.  I'm usually firing on all cylinders at work, very immersed in my job, staying late, fully engaged.  And I'm just not.  I'm going through the motions and getting stuff done, but it feels very mechanical and I feel distant.  It doesn't help that one of my biggest cases settled and there was a lot of horrible publicity about it (national news and People picked it up, which made my job so much fun since everyone was so pissed off; not pissed at me, because I just did my job, but I feel like I was the fall guy, since technically, I was the one who reached the deal, even though I did it with everyone's blessing).  Anyway, so my work just kind of blows lately.  I feel like I'm just doing it for the paycheck, which has never been my style.  My husband is having the same issue.  He has an official work "end time" (5:00) but for the last several years, since he's been in his current role, that has been largely meaningless.  We've both stayed at work on average until 6:30, sometimes much later.  But he's just punching the clock lately, walking out the door at 5:01, not really engaged or caring about what more he could do, just leaving it to pick back up the next day.

But even since we're home early, it's not like we're doing anything great.  It's dark so early, we don't really want to go biking (we both left work at 3:30 one day this week and were on our bikes by 4, so that was fun, but that's not a common occurrence).


And we're not going out for drinks or fun dinners.  I desperately want to lose the weight I gained in the 6 weeks.  So being hungry much of the time certainly isn't helping my mood.  Our usual at home routine is pretty healthy.  I certainly can't eat and drink like I'm on vacation or I'd be 200 pounds in a heartbeat.  Our healthy routine is certainly good for us, but it's just not as much fun as a cheese plate and bottle of wine in a little Armenian hole in the wall in the middle of the afternoon.


We're back into the routine of working out, but that's not exactly going well either.  First, boot camp is leaving us exceedingly sore again.  I know, it's just a matter of persisting, getting back some of the strength we lost, but it's certainly not fun to always be sore and feel like it's all just so hard.  And second, running isn't coming easily either.  The extra weight doesn't help, and my best running buddy, CW, has been traveling a lot for work lately.  There's pretty much no chance I can do the marathon in San Antonio in a couple weeks as planned.  I ran 15 miles last weekend and it was a total $hitshow.  Usually at least we have great running weather when we come back from vacation, but yesterday morning it was 71 degrees at 5 a.m.  WTH??  We've had a few cool mornings, and I actually did have a fabulous run one day last week, but in general, it's just been hard, slogging along, not really enjoying it, just going through the motions.  I'm of course happy to see my friends, but I don't even really feel like talking lately.


We've also made half-hearted attempts at planning things with friends, but even that hasn't worked well.  Either we claim to be too tired and cancel plans (which I basically never do, I pride myself on my reliability, but that hasn't been the case in the last few weeks), or we don't even make plans because we know we just want to sit at home and do nothing except watch TV and sleep.


I don't know what's different this year.  It's very grey outside lately, which doesn't help.  And we both were sick when we came home and only feel like we've really officially kicked the crud out in the last week or two.


One thing we usually do that keeps us engaged and happy is to start planning our next trip.  That usually helps, but we're holding off a bit on that this year, so maybe that's bumming us out more than usual.  Next year's plan is southern Africa, but that whole "bloodless coup" in Zimbabwe has us feeling more non-committal about planning.  But hey, I heard the current administration is going to let us kill elephants for trophies if we go!  So I guess there's that?  (Just to clarify, that is definitely not the plan and is perhaps a disincentive to go...)


Maybe Thanksgiving and gearing up for Christmas will help.  I've been fairly on the ball about shopping and planning, and have even gotten started on cards, but my heart just isn't in it.


Not looking for sympathy.  I really don't feel like I have a right to feel this way.  But I do.  And I thought writing it out might help.

It's certainly the time of year to start thinking about resolutions, where the past year has gone, where the next year is going.  This year I feel like I'm thinking about it earlier than usual.  Maybe it's because I'm kind of on my Christmas game but I'm dreading the thought of gaining weight with any of the upcoming trips, parties, etc.  Perhaps because I gained A LOT of weight on vacation and in an insanely stressful (work-related) first couple weeks home, I'm pondering a lot of food-related ideas for my 2018 resolutions.


I had a significant list of 2017 resolutions (that I really should review again), but the new and challenging ones for me were both work-related this year.  First was to check my voicemail every day I'm in the office and there's a message.  I've failed at this a few times (less than 4 I think), and there have even been a few times I've checked my voicemail when not in the office.  So I'm counting this as a huge success, but man, I can't wait for January 1 so that I can be done with this.  I hate voicemail so much.  Second was to do "more" of my own filing.  It wasn't a well-defined goal, but I basically have decided to file any emails I send right after I send them, and to file any emails I receive if I deal with them that day (if I deal with them later, then they go to my assistant to file).  I haven't done filing when it's a flurry of emails on one case sometimes, but this has also been a smashing success, and is something I will aim to continue.


Trying to meal plan and meal prep a vast majority of Sundays we're in town.


Cutting out all non-pizza or non-dinner party cheese consumption at home.


Some of them I've done before either as a resolution or during Lent, but some are totally new.  Good thing I have many weeks to still consider.
Posted by Carina at 7:42 AM 3 comments:

Quiet couple months in the blog world for me lately.  Not for any particular or good reason.


We went on vacation at the end of September, and then both started feeling crappy on the last day of vacation.  Just bummed to return to the US I guess?


Unfortunately, we came home on a Sunday night and I had to go to Philly for work on Monday morning.  Of course all my suits were clean and ready since I didn't need them on vacation, but I was kind of doing a sniff test with my underwear -- like can I get by with wearing this again or do I actually have to do laundry in my 14 jet-lagged overnight hours at home?  Laundry was most assuredly required.


It totally sucked to go to Philly, but if I hadn't gone, my coworker would have had to go in my place, and that wouldn't be fair to her.  It would be like I was on a 4th week of vacation if I wasn't willing to do whatever it took for work, be that travel or anything else.  So Philly it was.


Philly last week was pretty much a disaster.  Biggest case of my career falling apart all around me.  But fortunately, statistics were on my side.  Almost no civil cases really go to trial, and sure enough, right on the eve (literally) of picking a jury, everything finally came together yesterday.  But it's been a stressful 12 days back in the US.


Finally getting over whatever crud we got.  My husband actually took a sick day, which is crazy for him, especially after more than 3 weeks of vacation.  Work was actually less crazy for him coming back since all cases that came in while he was gone were assigned to other people, so it actually took a week or so for him to be fully back in the swing of things.


The other big change since August...


I got a bike on Labor Day weekend for my birthday!


It was the perfect weekend to buy a bike since Dallas had a weird illogical fuel crisis right after the hurricane.  Slightly less than the usual amount of fuel available, slightly higher demand (people filling boats and cans to go to Houston to help), and then suddenly a major run on the pumps with everyone filling up their car and almost all stations running out of gas completely!  My husband was on call for work and was almost out of gas in his personal car (planned to buy it on the way home on the day all the stations ran out) so he had to drive a work car for a while so he'd be able to get back to work if needed.  Crazy.  So buying a bike was perfect since my office is close enough to ride (or run) to work.  Gas crisis basically started on Wed night or Thurs morning, and was over by the following Monday, which was Labor Day.  I was glad because my car was on a quarter tank, which is usually plenty since I don't drive a lot, but of course I had to fly for work on Labor Day and needed a full tank to get to and from the airport.  Uber wasn't even an option -- no one was driving.  Crazy.  Anyway, the bike was the news -- I'm clearly distracted.


So my life according to Garmin has looked like this: 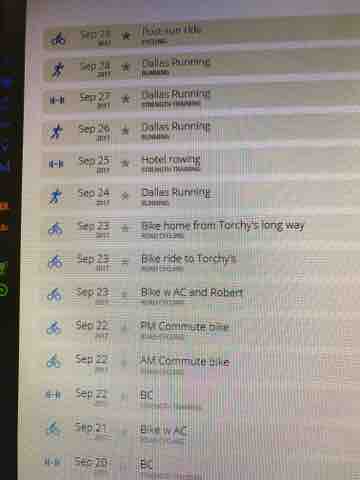 A bit of running here and there, boot camp roughly as usual, and tons of biking!

It's been fun.  I don't have clips yet because I'm afraid of falling and I'm not good at biking yet, but it's just cool to be able to cover so much distance so fast.  Very unlike running.  It's also nice because it doesn't feel quite as warm when there's a breeze from your speed.  Much less exertion than running, at least the way I've been biking.

But there you have it.  I've broken the seal now, so maybe I can get back to regular writing, or at a minimum, regular reading of my other favorite blogs, which I really miss!
Posted by Carina at 6:50 AM 3 comments: