Well, this is the time of year that I make friends with the treadmill I guess.

Given the gym holiday schedules here, I moved my long run to Saturday and my Yassos to Monday.

So Saturday I planned to go to the gym with one of my sisters-in-law.  When we were hanging out on Friday night, she said she wanted me to meet at her place at 10 the next morning to go to the gym.  I told her I'd have to drive separately because I had 18 miles on the schedule and I wanted to allow about 3 hours.  She said that was fine and at one point later in the evening asked me what my ideal running time was.  I said about 5:30 a.m., mostly just because that's what I'm used to doing (the whole work thing, plus the fact that it gets hot, hot, hot after 10 a.m. for several months of the year in Dallas).

Well, I woke up Saturday and was on track to be at their place at 10.  Until she called at 9:30 and said that she was still a little sore in her hamstring, so she was going to take a pass.

That meant that I basically just pissed away the morning for no reason.  I would have much preferred to be at the gym at 8 and done before lunchtime.  Maybe even before 8!

But oh well, that stuff happens.  I sucked it up and went to the gym solo.  I bought a day pass and hopped on a treadmill.  Fortunately, I had earphones, so I was able to watch TV.  Unfortunately, the treadmill shuts off after 60 minutes.  So after the first hour, I took a gu and then started back up.  I pushed a bit harder during the second hour, and completed 3 intervals of 1 mile each at theoretical marathon pace.  It did not feel sustainable ever for more than a mile at a time.  When the treadmill shut down after hour 2, I took another gu and fired it back up to finish out the balance.  I was absolutely amazed to be able to say that I did 18 miles on a treadmill.

It helped that there were windows nearby and I could see all the snow, reminding me why I was putting myself through the treadmill misery.

Unfortunately, it drained a lot of my energy.  After the run, I swung by the mall to get the last 2 items I needed, then I took a massive unplanned nap.  Oops.  Saturday night was uneventful.  Take-out and a wrapping marathon.  After about 8 hours, everything with the exception of one pair of tights for another sister-in-law was wrapped.

I'm so excited about some of the gifts we're giving.

Most notably, exactly what my nieces (a guitar and a fur baby dog thing) and nephew (a huge Nerf gun) wanted, as well as a few other things I think people will love.

Well, Sunday was more of a planning mess.  Hubby was supposed to land at 11:30 on a flight from Chicago, where he flew that morning from Pittsburgh.

I woke up Sunday to snow coming down hard, so I scrapped my plan to go to the gym to do some weights (guest pass was good for 24 hours), and I mostly got packed up to drive north.

But then hubby's flight got cancelled.  And then the 11:55 bus to Milwaukee was full.  And then he couldn't get on another flight, but managed to get on the 12:45 bus.  But the bus was late, so we weren't reunited until about 2:30.

Fortunately, by then the snow had stopped, but given that the sun goes down around 4:30 here, it meant some very treacherous driving up north.  Ugh.  The roads weren't great and it was very slow going (I was paranoid about last year's car accident in the snow repeating itself).

We finally made it up here, safe and sound, around 8.  My mama had held dinner for us, and it was wonderful.

Finally got to bed in a VERY COLD house around 10:30ish.

That meant my 4:45 wake-up came early.  My mom wanted to leave the house by 5:10 to go to the gym, and hubby and I were eager to tag along and get in workouts.

Especially since by the time I got home from the gym and got to work, the weather had warmed up to this: 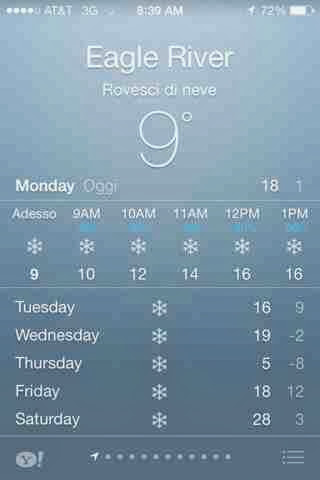 But when my mom heard that I had 10 Yassos on my schedule, she determined that we had to take separate cars.  She just wanted to do weights for about 45 minutes, and I knew I'd be closer to double that, particularly since I kind of wanted to do some weights after my run.

I hopped on the treadmill and fired it up, thinking that I would attempt the magical number of 10 Yassos.  I warmed up for .75 miles, then already hating the drudgery, decided to cut my warm-up short and just start on the intervals already.

My mom came by my treadmill after I was recovering from the first one.  I told her I just didn't think it was my day, and that I was thinking of running easy instead of doing the workout.  But in my head, I knew I needed to suck it up and do it.

So I buckled down.  I did the first 5 right on pace (treadmill magic), with an incline of .5.  Then I kind of cheated and put the incline down to 0 for repeats 6 and 7, and then I was mad at myself, so I put it back to .5 for repeat 8.  But then I was blasted exhausted, so I put it back down for repeat 9.  Finally, for repeat 10, I decided to bump the speed up another .1 mph (I think the difference in mile time was about 5 seconds, so about 2.5 faster for the final Yasso).

And then, gloriously, I was done.

I don't feel like it's totally legit because:
a.) I had the incline at 0.0 for 4 of them.
b.) the treadmill did my pacing for me.
c.) I did quarter mile recoveries after each (needed it the last few times, but did it for all because it made the math easier).
d.) I walked all of the quarter mile recoveries except one that I jogged.

And that's when it seems something went wrong.  I have some weird pain on the top of my right foot.  It doesn't hurt at all to walk or anything, but it's almost like I bruised the top of my foot.

Well, it's not the end of the world.  I'm planning to go back to the gym dark and early tomorrow, but I was planning to do a spin bike or something like that instead of running, and to mostly focus on doing weights.  This gym has more different machines than maybe any gym I've ever seen.  It's not huge, and they only have one of each, but there are some really different machines that I've never tried before.  I think if I spent 1 minute figuring each out and setting the weights, and 1 minute using it, I could easily spend an hour there.

Sun coming up in the coulds outside the gym: 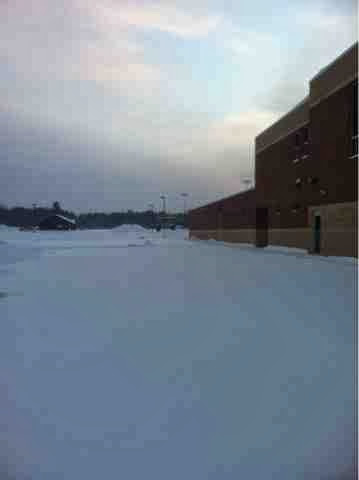 A winter wonderland driving back home from the gym.  Yeah, attempting speed work on that would have spelled a broken ankle and/or missed paces.  Just not an option... 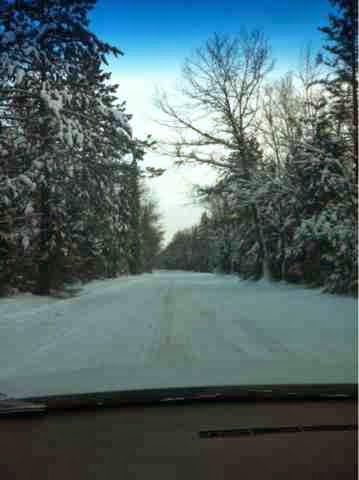