Revenge of our European Vacation

Somehow one random charge for some Berlin Marathon clothes that I bought at the expo just posted to my credit card in mid-November, but since it hadn't shown up before, no big deal, that will be due in January and the amount was insignificant.

But just when we think we are done, it just keeps coming.

A few weeks ago, he got hit on his credit card with a charge from the car rental company indicating we'd gotten a speeding ticket in Switzerland.  Of course we had no idea!  We were never pulled over at any point on the trip, but I guess they check speed by planes and cameras and just send tickets in the mail.  Oops.

Anyway, we still haven't gotten the actual Swiss speeding ticket, we were just charged the $36 or so in administrative fees by the rental car company (Sixt) for them to provide driver information to the police so that the police can then send us a ticket apparently.

Well, here's the text exchange with my husband last night: 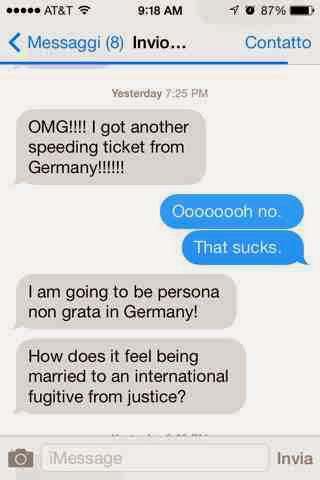 So now a second $36 administrative fee has been charged, and now we're waiting for a second ticket in the mail!
We drove all the way from Berlin to Lamezia Terme in southern Italy, so we really had a lot of hours in the car -- obviously fewer hours than we should have, since we were apparently speeding.
Anyway, given what we know about Italy, we've been joking about how many years it will take before the charges for all the Italian speeding tickets we probably unknowingly racked up show up on the credit card!
But as an aside, this seems kind of unfair.  If they can issue tickets by mail days or weeks later, what is to stop them of taking a new speed calculation of your car every 30 seconds or something and issuing a new ticket?  Technically, I'd think each second you are speeding is a new violation.  When you don't know that you're speeding (or that speed limits are enforced, that whole German autobahn thing), and you don't get pulled over, you can just keep going and going and going...
Posted by Carina at 9:27 AM