Time to Play the Lottery

I think I need to buy a lottery ticket today.

Yesterday was rainy and a bit stormy in Dallas, but I managed to time my run to work perfectly and I stayed dry.

This morning I got up to meet my running buddies for some hills.  It was dry, but they were saying rain was on the way.

By the time I met my friends and we got underway, it was raining, but not hard.  And by the time we got to the hills (about 10 minutes into the run), it had stopped and we stayed dry for the rest of the morning.

I got home and had breakfast (a smoothie again, I'm a creature of habit).  I noticed my husband had unloaded the dishwasher sometime during my run before he left for work, and we had a sink full of dirty dishes waiting to be loaded.  I started doing that, then I saw the local weather come up on TV. 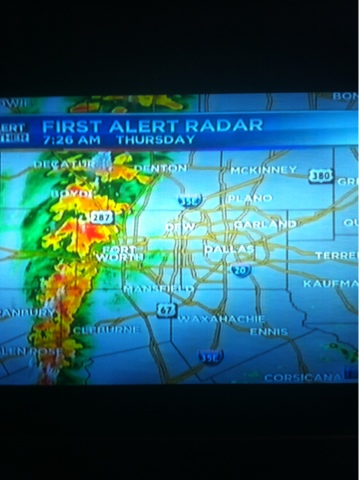 And note the time on that photo -- 7:26.  My goal is to leave for work at about 7:45.  That has happened maybe once in the 3+ months I have been commuting.  I am usually out the door around 8, by 8:05 at the latest.
But at 7:26, they were saying that the storms would be reaching Dallas in less than an hour.  Thunder, lightning, lots of rain, and reports of hail.
Remember, my commute is 3.75 miles.
Even loosey goosey with the numbers, a 7:30 pace, a 10:30 pace, either way, that meant it was time to get my butt in gear.  Maybe even past time to get my butt in gear.
I gave up on loading the dishwasher and hurried to brush my teeth, get my heart rate monitor and watch back on, get my phone into my running belt, get my running belt on, get my shoes on, set the alarm and get out the door.
Within half a mile of my house, I saw a guy walking two big dogs I'd never seen before.  He was taking up the entire sidewalk (I run the first .4 or so miles of my commute on the sidewalk before switching to road for most of the remainder).  As I approached, he reined in his dogs and I kept moving.
I was wearing a running baseball-type hat to keep the inevitable storms off my face, so I didn't get a good look at the guy as I passed, but he said "storms moving in within half an hour."  I waved and picked up the pace.
I tried to book it most of the way to work, despite the fact that my legs were not happy with this plan, given that we'd just run several miles of hills a couple hours earlier.  I was lucky in that I hit all three of the traffic lights just right and didn't have to stop, but by the time I was in the final mile of the commute, it was getting very dark out and I could see ugly sky ahead.
So I picked it up to marathon pace for the final burst uphill and downhill and through the parking lot.
I made it to the office dry and out of breath.  I took the elevators up to my office (9th floor), walked to my office, started up the computer, and took a picture of my watch to text hubby (a daily habit so he knows I made it), and then I heard the rain hitting the window in my office.
If I'd finished loading that dishwasher, I think I would have been caught in the thick of it.  I don't remember if it was in Runner's World or on the web somewhere, but I saw two graphic pictures once of a topless male runner after he had been caught in the hail and I've never forgotten what that looked like.  Thankfully, I don't have my own experience to add to that memory.  Whew.
Feeling very lucky to have made it dry and hail-free.  Seriously thinking this might be the day for my twice-a-decade lottery habit!  ﻿
Posted by Carina at 9:41 AM