My dream last night (well, as I'm writing this, the dream was last night; at my current pace, it will take forever to post, especially if I add a couple pics from my phone of City Hall, which I really intend to do):


In my dream, I flew into Philadelphia and we landed early, which was good because my flight was scheduled to land at 10:33 and our settlement conference was starting at 10:30.


-- This part of the dream is actually based in reality.  I have another commitment on Sunday night this weekend, so I am taking the first flight to Philly on Monday, which leaves at 6 a.m., and lands at 10:33.  That sounds good, but I actually need to be in Philly on Monday for a court setting at 10:30 (my defense counsel should be able to cover it and stall until I get there).  It is no surprise I'm dreaming about this since I'm nervous and uncomfortable about being late for a setting, but it was really my only option given my personal Sunday night obligation that is a very high priority, and the judge has indicated I cannot appear by phone.  I'm crossing my fingers that my flight really will land at least 15 minutes early so I'm not very late.


Back to the dream.


I got in a cab at the airport.  The driver was male for the driving part of the dream and female for the end part of the dream.  The airport was on the north side of the city (not true in reality) and the driver was taking me into Center City on some C-curve looking side street on the map on my phone that was west of the most direct route.  This was fine because while taking the highway straight south was more direct, I could see on my phone there was lots of traffic on the highway, and the side streets he was taking definitely seemed faster.  I was so happy the driver was getting me there quickly.  The driver was telling me about some neighborhood we were going through and how it was initially mostly Polish immigrants, and I could see some of the signs had Eastern European type names.  (100% dream, nothing I remember seeing in the dream was anything I remember from Philly, and I know of no such neighborhood there.)  While taking this western curving route, the driver was still going toward where I needed to be.  In the dream, I had a message from defense counsel telling me exactly what corner intersection was closest to the court's entrance.


-- In reality, just last week, I had a settlement conference in Philly that was at City Hall, which is a huge (and beautiful) building in the center of town, but only has one open entrance, with no big sign, kind of tucked in one of the many caverns alongside the building, which means a ton of walking in heels if you don't know which side of the building has that entrance.  That hurt.  So it makes sense that I would ask counsel where would be the best possible place for a cab to start when I know I'm going to be late.  City Hall in Philly, as I saw it last week: 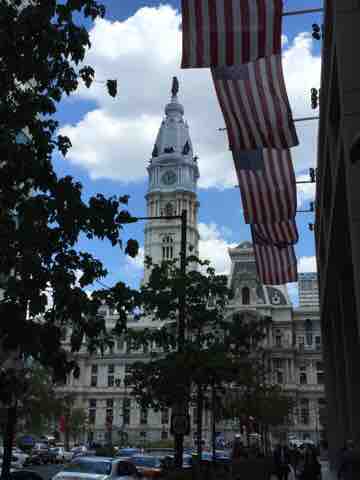 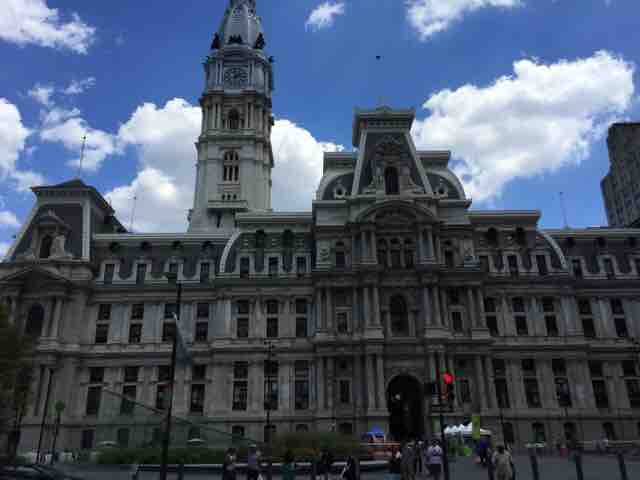 Back to the dream.


Our cab pulled up to the courthouse and then I realized the meter was off.  The driver (female now) had a swipe credit card machine on the front seat that was showing a lot of gibberish (not true in reality, all Philly cabs have a thing on the partition where you swipe your own card).  She asked if I could pay cash, and I said I couldn't because it was work travel, so I am required to use my corporate card, but also because I didn't have any money with me (both usually true in reality).  Well, she got the credit card machine to work and she said the charge was $611 or $621 (I can't remember which).  In reality, it's always $28.50 from the airport (south of the city) into Center City.


In the dream, I was trying to politely and hurriedly dispute the charge because I really liked the driver, and I'd been planning on giving him/her a $10 or $20 tip anyway for avoiding the traffic and getting me to court so fast.  But I was saying that it had to go on my card, and it couldn't be more than $30 not counting tip, and that $600+ was not right.


In the dream, the driver ended up coming into the courthouse with me because we still hadn't figured out payment and I had to try to find which courtroom we were in.  The dream courthouse was nothing like any courthouse in Philly or elsewhere that I know, I guess it kind of looked like I foggily think of Grand Central Station looking from movies and maybe 1-2 times I've been there.  Anyway, in the dream, when we were trying to find the courtroom, I was really worried about how I was going to sort out the charge.  And then I woke up to pee.


What does that mean?


Am I worried about someone somewhere somehow trying to overcharge me?  But what?  No purchases come to mind, and I'm actually more flush right now than I have been in years probably thanks to a bonus that is presently sitting in my checking account (haven't spent it yet -- likely just doing boring things like IRA, extra mortgage payment, putting some in savings, etc., but right now, it's just there).


I guess that's my big question -- when I fell asleep and started dreaming about this upcoming trip, did my brain already know it was going to end with the $600 charge?  Or do dreams just unfold as you go?


I suppose it's quite possible no one knows.  But since I so rarely remember my dreams and this one was so bizarre, I figured I'd share.
Posted by Carina at 6:20 AM